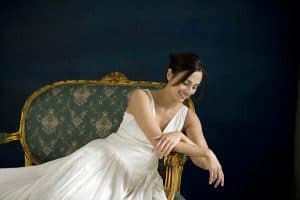 Isabel Leonard will explore the riches of Spanish song, in all its varied Iberian forms and styles in her upcoming Preludios, but Kennedy Center audience members got a bit of a preview on Tuesday evening in her concert with guitarist Sharon Isbin, and her performance left quite the impression on Washington Post critic Stephen Brookes:

“the real star of the evening turned out to be the less-familiar Leonard, a rising young mezzo with a radiant, bell-like voice and a captivating sense of drama. The duo opened with four folk-based songs from the ‘Canciones Españolas Antiguas’ by Federico Garcia Lorca (in arrangements by Isbin), and Leonard immediately seemed in her element, probing the dark, unsettling veins of tragedy and pathos — from blood feuds to early deaths — that run through every note. This is music that, as Lorca said, asks ‘a terrible question that has no answer,’ and Leonard dug deeply into their mysteries, proving herself more than just a pretty voice.

That said, what a voice it is — supple, perfectly controlled, capable of great power, but with a lilt, purity and expressive warmth. Then there’s her engaging charm: After singing a lullaby from Xavier Montsalvatge’s ‘Cinco canciónes negras,’ Leonard coaxed a young girl from the audience to join her onstage for an impromptu dance to ‘Canto negro.’” —Stephen Brookes, Washington Post

Preludios includes works by the above-mentioned Federico García Lorca as well as the Xavier Montsalvatge Cinco canciónes negras and Lullaby!