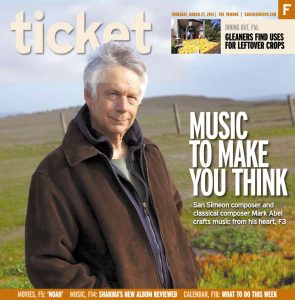 San Luis Obispo’s The Tribune has a major feature on Delos composer Mark Abel and his two Delos recordings (The Dream Gallery and Terrain of the Heart):

“As a journalist-turned-classical composer, San Simeon resident Mark Abel knows how to set the scene. ‘I’m just trying to give people something to think about. I’m trying to place them somewhere temporarily,’ Abel said. In his 2012 album ‘The Dream Gallery: Seven California Portraits,’ Abel explored the psychological landscape of his home state. His new album, released by Delos Productions in February, charts even more intimate territory — ‘Terrain of the Heart.’ …

“In ‘Terrain of the Heart,’ which features collaborations with Los Angeles-based sopranos Jamie Chamberlain and Ariel Pisturino and pianist Victoria Kirsch, the composer plumbs his personal life for inspiration. The album opens with ‘The Dark-Eyed Chameleon,’ a poignant song cycle that charts a romantic relationship from heady start to tragic end. ‘That’s about as revelatory as I think I’m ever going to get in my music,’ Abel said, acknowledging that ‘The Dark-Eyed Chameleon’ was inspired by his own traumatic breakup. ‘I could have not dealt with it. I could have sublimated it and never turned it into a piece of art. But it needed to come out.’ Also featured on ‘Terrain of the Heart’ are ‘Five Poems of Rainer Marie Rilke,’ which Abel originally wrote in 2004, and ‘Rainbow Songs,’ four songs about romance and redemption that ‘share dreamy qualities and bursts of kinetic energy,’ Abel writes in the album’s liner notes.” —Sarah Linn, The Tribune

Read the full feature on SanLuisObispo.com!