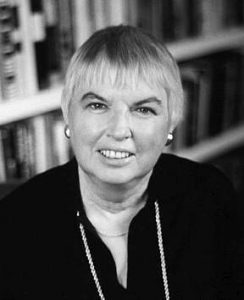 Delos was actually the third career for this remarkable woman, born Amelia Da Costa Stone in Gainesville, Florida. Her mother’s side of the family went back to the original Spanish settlers of Florida. Her father, who came from a family of doctors, had left a judgeship to join the law faculty of the University of Florida in Gainesville. Amelia grew up with an intense love for music, especially opera and art songs. She and her younger brother, often together with their father, would listen to opera broadcasts and old recordings of the “golden age” singers by the hour.

A gifted youngster, Amelia graduated from high school at age 15. Her interest in languages and international relations took her to Paris to study at the Sorbonne when she had just turned 16 — shortly before the beginning of World War II. During her study year abroad, she wrote articles for her hometown newspaper, encouraging Americans to look beyond their then-isolationist point of view.

Back in the U.S., after majoring in history and international law at Florida State University, she went to Washington, D.C. to work for the State Department. Her job brought her into contact with movers and shakers of the Roosevelt Administration, since she was Editor and Director of Publications for the State Department Interdepartmental Committee for Cultural and Scientific Cooperation.

Leaving Washington in her mid-20s to marry J. Douglas Haygood, a clinical psychologist then practicing in Cleveland, Amelia immediately found other important work to do. She initiated, for the International YWCA, a women’s program designed to develop interests outside of the home, especially in public affairs. Her interest and skill as a therapist began to emerge, and she went back to school to do graduate work in medicine and clinical psychology. When the Haygoods moved to Los Angeles, she joined her husband’s psychology practice in Beverly Hills.

In the medical setting, Amelia worked in the Veteran’s Administration for four years, developing programs for pre-and post-operative patients, and contributing to research and publication in the fields of spinal cord injury and neurosurgery. After the untimely death of her husband in 1956, she left private practice to become psychological consultant to the Los Angeles County Probation Department, developing a successful pilot treatment program for juvenile offenders and their families, and conducting workshops for professionals in the field of family treatment.

In the early 1970s, after seeing a close friend through a long terminal illness, Amelia felt she had reached a crossroads, and catalytic change was taking place. Her lifelong passion for music, her interest in musicians, recordings and hi-fi, as well as her graduate study of psychoacoustics and the physics of music, merged in a new life direction.

Long a friend of a number of American concert artists, she had become increasingly disappointed in the lack of recording opportunities for these fine artists. It occurred to her that providing an international platform for outstanding American artists and musical groups could be a worthy mission. In 1973, Delos was born. She named her company after the birthplace of the Sun god Apollo, who brought music and healing to the world, elements Amelia always felt to be closely connected with each other and with her own life.

It was a whole new life for this remarkable woman over the three decades that followed. She consistently kept her company on the leading edge of developments in sound recording, working closely with pioneers in the field, and initiating trends in the industry. Until the last months of a 12-year battle with cancer, she remained Executive Producer of all Delos recording projects, maintaining artistic and quality control through the various stages of recording, post-production, manufacture and packaging.

One of Amelia’s greatest joys was to share the enthusiasms and activities of her younger Delos staff. Her intense interest in people, along with her vast experience in communicating with people from all walks of life and cultural backgrounds, were qualities that informed her every endeavor and affected everyone who met her.

American trumpet virtuoso/conductor Gerard Schwarz came to Delos to make his last recordings as a trumpet soloist, and his first as conductor, at the time of his transition into a conducting career. He said, of those recordings: “They were my trumpet swan song, and Amelia’s attitude was to document it… She ran the company by emotion. Business came second to art.”

“The first thing Amelia would ask an artist is, ‘What would you like to start with?'” commented American pianist/conductor Constantine Orbelian, who has recorded over 50 albums for Delos. “When Arleen Auger first recorded the now-famous ‘Love Songs’ album, she wasn’t satisfied with her own performance. So Amelia let her re-record it. That’s unheard of.”

Orbelian, chief conductor on Delos “Opera Gala” (DE 3395), released in 2008, dedicated the album to Amelia, and wrote in the booklet notes the following tribute:

Dmitri Hvorostovsky dedicated his album “Heroes and Villains” (DE 3365), released in 2007, to Amelia:

I’ve known Amelia for the past seven years. They have been the most exciting and thrilling years of my life. At what is probably the highest level of my career, I’ve been taking steps forward as I discovered where and how to go; taking risks, and challenging myself increasingly… The entire time, I have cherished Amelia’s unwavering pride and involvement in everything that I’ve been through, every step of the way.

I remember my first talks with Amelia, strolling in the little forest just outside of Moscow, where she listened to my life stories and talked and talked in return, with charm and wisdom… Ever since, whenever we’ve been together, something important was happening in my life. Red Square, Los Angeles, the Met, London, Paris, Milan… And through it all, Amelia’s wholehearted interest and enthusiasm, her great knowledge and experience, her ongoing advice, have protected me from many mistakes, and have encouraged me to be brave and honest with myself and with other people…

I loved Amelia and love her still. I am sad that I won’t see her coming towards me with her outgoing, warmhearted smile, holding her usual glass of vodka in her hand…

I’d love to dedicate this album to Amelia.