“Rockmore is extraordinary… The theremin produces a throbbing vibrato that will at first amaze you, then delight you, and finally overwhelm you.” —CD Review

“…the most original, novel and difficult to play of all electronic musical instruments. No other thereminist has ever come close to Clara Rockmore’s artistry.” —Robert A. Moog

“Clara is to the theremin what Andres Segovia and Jimi Hendrix combined are to the guitar,” Steven Martin, producer of the 1994 film “Theremin: An Electronic Odyssey,” which itself contributed to a theremin revival.

Amelia’s other pick to represent the early Delos “analog” years was Clara Rockmore’s “The Art of the Theremin,” from 1977. Hearing such a great artist play soulful Russian music on this unusual instrument, conveying true depth of musical expression, transformed public perception of the theremin and inspired new interest in the instrument. Clara and her sister, the distinguished pianist Nadia Reisenberg, were both master performers and a superb artist team. The recording became an instant classic the moment it first appeared as an LP.

Robert A. Moog, the American electronic music pioneer and inventor of the Moog synthesizer, produced this unique recording, committed to an accurate documentation of Clara’s remarkable playing. Amelia loved working with him, and we were all enthralled by the “Immortal Clara Rockmore,” playing “the first viable electronic instrument.” Bob also wrote definitive program notes, complete with diagrams. He described Clara’s abilities, and the process itself, better than anyone else could have done.

I was between tours, and in New York City for Amelia’s first in-person meeting with Clara and Bob, at Clara’s apartment. It was a fascinating discussion covering a wide professional and personal range, as discussions tended to go when Amelia was present. We heard the dramatic story of Clara’s family in times of hardship in Russia, and her experiences as a young child. At age four, she had been the youngest violin prodigy ever accepted at the prestigious Imperial Conservatory of St. Petersburg, and was so tiny that she had to stand on a table to play her audition so that everyone in the jury could watch her performance. In the course of our afternoon together, Clara provided us with lavish refreshments, confessing that her friends called her apartment the “Russian Tea Room West.” Her apartment was on the other side of 57th Street from the real Russian Tea Room and Carnegie Hall, and a couple of blocks west.

Here is a quote from Clara herself about playing the instrument (More information on Clara Rockmore): “Before you finger the notes, of course, before you do anything, you have to have music in your soul. If I had to give advice to future thereminists, I’d say ‘less is more.’ You cannot treat air with hammers, you have to use delicate motions, you have to play with butterfly wings; precision is much more important than strength. You also have to have courage. Playing the theremin is like being a trapeze artist without a net. You don’t know if you’ll land correctly or not, but you take a risk and you jump, not only to arrive at the right note, but to hit the middle of the note, so you’ll be in tune.”

Every time I listen to “The Art of the Theremin,” it touches me as deeply as Clara’s performance did that day. Here is a great violinist, born into a family who lived and breathed music. Celebrated as a child wonder, and then as a young virtuosa, she falls silent through the tragedy of an arm injury. But a few years later she emerges once again, breathing life into a new-fangled electronic instrument that seems nearly impossible for anyone else to play. Clara gives the theremin its voice. Miraculously, the theremin in turn allows Clara’s voice and musical insights to sound once again, accompanied by her lifetime musical partner, her sister Nadia. We, the privileged listeners, are hearing a cross between a great violinist and great singer, fused into a unique expression that comes deep from Clara’s Russian soul. She found, in music we all know so well, nuances we had never heard before.
— Carol Rosenberger

“In 1927, two remarkable people arrived in the United States after lengthy and successful tours of Europe: Lev Sergeivitch Termen (anglicized to Leon Theremin) and Clara Rockmore (whose maiden name was Clara Reisenberg). Theremin was a young Russian physicist who was demonstrating a new musical instrument that he invented. The instrument, which he called the aetherphon, or thereminvox, and which later became known as the theremin, was played by the motion of the musician’s hands in the space surrounding the instrument. Clara Rockmore, a professional violinist from the age of 9, became aware of the musical potential of Theremin’s invention. She spent several years collaborating with Theremin during which time he developed his invention into a sensitive, wide-range musical instrument. Clara subsequently embarked on a performance career that encompassed well ov
er a hundred concerts, including appearances with major symphony orchestras, and set the definitive standard for theremin performance technique. 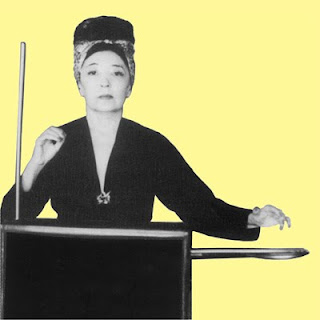 “The thereminist must move her hands with incredible precision as well as speed if she wishes to play distinct notes with correct intonation. Ms. Rockmore actually uses fingering patterns to play the most rapid passages. For instance, if she were to play an upward arpeggio, she would start on the lowest note with right hand tilted back and fingers withdrawn. To play the next note she would abruptly move her hand forward from the wrist, while keeping her right arm motionless. The third note would be played by rapidly extending the little finger, and the fourth note by extending one or two more fingers while simultaneously turning the wrist sideways to bring the newly-extended fingers nearer to the pitch antenna. She would then continue the arpeggio by moving her whole arm closer to the pitch antenna while drawing her hand and fingers back, then repeating the above-described succession of movements. At the same time, she may articulate each individual pitch by rapidly shooting the fingers of her left hand into the volume antenna loop, then withdrawing them, to silence the tone during the very short periods of time that her right hand moves from one pitch to another. No other theremin player has ever mastered this difficult and intricate technique for playing rapid successions of precise pitches – ‘aerial fingering’ as one reviewer termed it.”