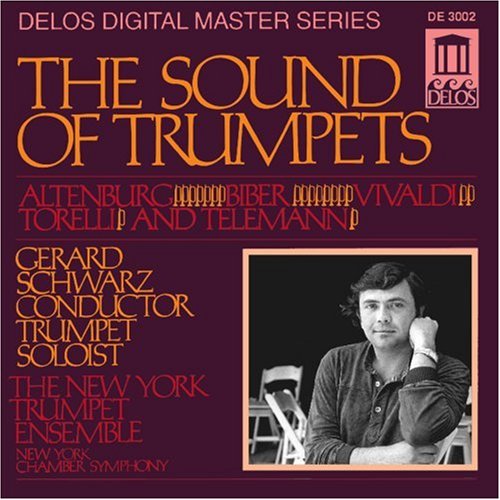 THE SOUND OF TRUMPETS

Record of the Year —Stereo Review

In 1979 Delos became a leader in digital recording when founder Amelia Haygood got together with another pioneer, scientist/inventor Thomas Stockham and his prototype Soundstream Digital Recorder. Amelia jumped into this new process with great zeal, deciding that among the very first adventures would be to capture Gerard Schwarz’s trumpet playing and to record some of my Impressionist repertoire on the Bösendorfer Imperial Concert Grand (more about that next week). Both projects put Tom’s new digital process through its paces.

The first two history-making recordings, recorded in March of 1979, were the Haydn/Hummel Trumpet Concertos and “The Sound of Trumpets.” They marked Jerry’s last performances as a trumpet virtuoso and his first as conductor, with his New York Chamber Symphony. He went on to make many great recordings for Delos, with the New York Chamber Symphony, the Mostly Mozart Orchestra, the Los Angeles Chamber Orchestra and the Seattle Symphony.

But these first two recordings were especially memorable for many reasons. Amelia had invited her friend, American composer Ellen Taaffe Zwilich, to help on the production side; and the whole series of sessions, with our engineer Stan Ricker, along with Tom Stockham and his own engineers, attracted much industry attention. The usual session playbacks morphed into informal post-session demonstrations, since everyone was fascinated by the new prototype digital process, and eager to learn more.

Amelia often told the story about a glitch in the Soundstream recorder at one point, which had inadvertently erased part of Jerry’s cadenza in one of the concertos. Tom and his engineers were distressed, but when Amelia broke the news to Jerry, he was unfazed. “His lip was swollen out to here,” she would demonstrate, “but he just said cheerfully ‘No problem; I’ll do it again’ and went back out on stage and did a brilliant cadenza.” Jerry remembers Amelia’s ability to keep an atmosphere of calm and focus for everyone: ”We must have had 30 music writers at this session. I was oblivious to them all. That’s how it felt with Amelia — nothing else mattered except the music.”

I (Carol Rosenberger) wasn’t in New York at the sessions myself, since I was on tour at the time, but I did help with the editing. Jerry had mapped out suggested takes and edits after listening to the playbacks. We edited the recording in Tom’s basement in Salt Lake City, where he had set up his prototype digital editing system. The hard drives went into machines of a size and shape that very much resembled electric washers; in fact, Amelia and I called them “the washtubs.” Each huge hard drive held approximately seven minutes of music. The editing process was cumbersome and basic by today’s standards, but a brave new world to us at the time. The transfer was especially sensitive, as we had to go from one “washtub” to another in the midst of a take, and not near an edit point. “Standby, Amelia,” Tom would call in clarion voice. “Standby, Jim!” “Standby, Jules!” And on through the list of those manning the various transfer posts. And our mission would be to accomplish the transfer of another seven minutes of source takes! We worked far into the night at the editing console; and Amelia and I took turns working with Tom’s engineers. Whoever was on break was free to take a catnap on the floor of Tom’s basement.

Thus it was that Jerry and friends joyfully “trumpeted” the dawn of Delos’s digital era. The recordings appeared first as LPs, since the digital playback format had not yet been determined. Once Sony/Philips had decided on the CD format, Delos was the first independent classical label in the U.S. to release its own CDs; and once again Jerry’s virtuosic clarion call proclaimed the new medium.

Since Antiquity trumpets have conveyed magical strength, nobility and authority; and their multi-purpose use over the centuries has ranged from the military to the spiritual. During the High Baroque, trumpet playing reached a pinnacle of musical refinement and virtuosic skill. Outstanding trumpeters, celebrated throughout Europe, inspired a golden performance age which produced compositions of a brilliance to match the performers’ virtuosity. It seems appropriate that the revolution in digital sound should be given a fanfare from such a glorious past. On this recording we present five works which span that fascinating age and represent some of the finest German and Italian music ever written for clarino trumpet.

Baroque trumpets were natural instruments — valveless metal tubes approximately eight feet long, either straight or coiled into a loop, with cylindrical bores and flared bells. They were capable of producing only one note, the fundamental, although overtones could be obtained by changing lip tension at the mouthpiece. To achieve a complete diatonic scale, trumpeters were forced to play in the top, or clarino, register, sometimes up as high as the eighteenth overtone. Bores were made narrower to facilitate technique, and as a result the natural trumpet, unlike the modern valve trumpet, had a soft, flute-like tone. Composition for these instruments presented grave difficulties, since they could not move harmonically very far from their fundamental pitch. Intonation was often insecure, and melodic limitations loomed in all but the upper register. As musical styles began to change in the
mid-18th century, clarino playing became passé and began to decline. In the aftermath of the French Revolution many of Europe’s smaller courts and consequently private trumpet corps, were swept away and inventors began experimenting to find a more practical instrument. And finally with the 1813 development of the valve trumpet, the once highly-prized clarino techniques were lost. From the classical era until recent years much of the music written for the natural trumpet was considered unplayable. However, the brilliant trumpet virtuosi of our time have developed the techniques and stylistic command to allow this music once again to dazzle and delight the listener.