36-for-36 – Water Music of the Impressionists 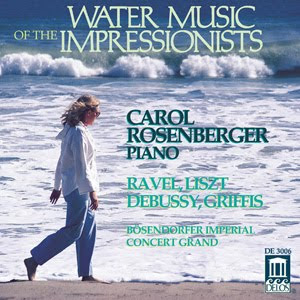 “defines the state of the art in piano recordings.” —CD Review

Trumpets and sounding brass began Delos’s digital era with recording sessions in March 1979. Three months later, in June 1979, Delos founder Amelia Haygood and her team undertook another digital adventure, “Water Music” of the Impressionists. Once again scientist/inventor Thomas Stockham and his prototype Soundstream Digital Recorder participated in the project. When Tom, Amelia and recording engineer Stan Ricker had first begun discussing the repertoire with me, we decided to seek out a very special instrument, the Bösendorfer Imperial Concert Grand. I had played Bösendorfers during my student days in Vienna, and was excited to discover that one of the few Bösendorfer Imperials in captivity in the U.S. could be found in Southern California.

It was early in 1979 when Amelia and I made what was to be a life-changing trip to Colton Piano Company in Orange County, for a live encounter with the Imperial. After an hour or so of playing a variety of repertoire on the splendid instrument, I had fallen hopelessly in love. Amelia, who hadn’t encountered a live Imperial up close before, was ecstatic. We inquired about rental availability for possible sessions in June. “Yes, it’s available, if it hasn’t been sold by then,” was the reply. Sold? This glorious instrument was for sale? And someone else might buy it? My world changed. Bolstered by Amelia’s enthusiasm, I did a quick but intense soul-search, made a trade-in decision, and made my peace with a long-term financial obligation. And just like that, I became the lifelong guardian of “Bösie,” as we came to call the magnificent Imperial. Bösie must have been comfortable with the arrangement, as it has been singing happily ever since.

Bösie’s singing sound is due to many things. Its lowest note is a C, an interval of a sixth below the lowest note (A) on a conventional piano. The extra strings give a richer resonance to the entire instrument. The Imperial is also six inches longer than the standard concert grand. To quote Bösie’s longtime piano technician, Heriberto Lurgenstein, in his notes for the original album: “The design of the Bösendorfer’s plate allows for an unusual escapement of sound, and the extra length and width add to its characteristic sound… A unique use of solid spruce is another key to the Bösendorfer’s resonance. Spruce is the material used for all concert grand sounding boards… In the Bösendorfer, however, the entire inner-rim assembly is also constructed from solid blocks of spruce and the outer rim is made of panels of sounding-board spruce. The piano’s construction therefore resembles that of a string instrument rather than a percussion instrument.”

Bösie seemed to all of us the perfect instrument for this recording, as its subtle bloom after the hammer has hit the string enables the player to convey the liquidity and flow of “water music.” Interestingly enough, Ravel himself expressed the desire that the piano tone continue to sound, or at least give the illusion of doing so, after the hammer has hit the string. And Debussy wanted the piano to sound as if it were “an instrument without hammers.” Bösie’s new hammers were soft; and this, together with its special resonance, did allow a blending of tones and at times an almost attackless sound.

I’ll never forget the first time Stan, Amelia and I had a meeting to discuss how best to record Bösie and the Impressionist repertoire. I happened to be practicing when Stan came in. He ran/walked straight to Bösie, bent over, and stuck his head as far as he could in between the raised lid and the strings. He motioned for me to keep going, a look of utter ecstasy on his face, drinking in that special sound from its purest source.

Amelia, together with Stan, decided on Bridges Auditorium in Claremont, California for the Water Music recording. As she wrote in the original album notes, the hall had “a good music-making ambience; a large warm, not echoing room with height, irregular surfaces and lots of wood. With our engineering we tried to create the sensation that you (the listener) are seated in the choice seats – about ten to twelve rows back in the hall… Since this music is all about water and liquidity and motion, I did not want to emphasize each tone at the sacrifice of the natural blend of the hall and the ‘watery’ atmosphere created by the pianist.”

Sometime between this meeting and the June sessions in Claremont, Stan called Amelia one morning to say that he had sat bolt upright in the middle of the night, having had a vision of exactly how he would place the microphones for the upcoming recording. He had been thinking constantly about how best to capture Bösie’s singing sound, and balance its resonant bass with the clarity of its treble.

I told Amelia that I was tempted to add the low “C” found only on an Imperial (see above) to Debussy’s single-tone “bourdon” effect in “The Sunken Cathedral.” Thus each sounding of the “bourdon” would be a sonorous octave rather than a single tone. Amelia egged me on to do it; we both felt that Debussy would have approved. The enriched “bourdon” special effect, suggesting the tolling of a great cathedral bell, thrilled Stan, Amelia, Tom, the Soundstream engineers and countless subsequent listeners. There — captured lovingly by Stan — is Bösie’s bass in all its glory!

The album begins with three “fountain” pieces: first Liszt’s cascading, spraying arpeggios and glistening tremolandos conjuring up the fountains of the Villa d’Este; then Griffes’ gently sentimental Fountain of the Acqua Paola with its “shimmering lights” reflected in “happy bubbles”; and finally Ravel’s celebrated Jeux d’eau, which he prefaced with the quote “Dieu fluvial riant de l’eau q
ui le chatouille” (a river god laughing at the water which titillates him).

Ravel’s magnificent “Ondine” must be the masterpiece of all “water pieces,” sensuously beautiful, with its sad and tender song accompanied by scintillating liquid figuration. Debussy’s “Ondine” is a more mysterious aspect of the water nymph; “Goldfish” is wonderfully playful; and “Reflections in the Water” is peaceful in its lovely, ever-changing images.