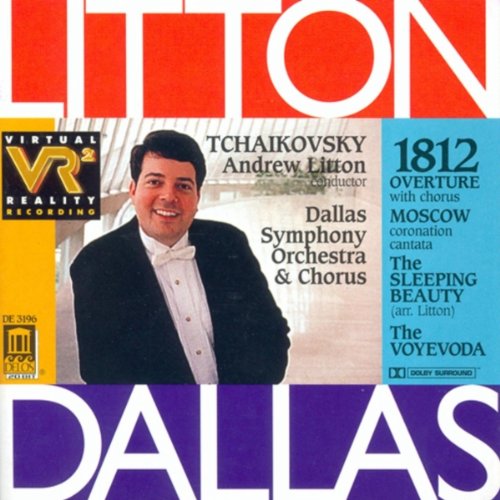 “Absolutely stunning, in tonality and in dynamics.” The Audio Critic

The rarely performed choral version of the 1812 Overture is the star of this Delos Virtual Reality Recording. The album proved to be a major event, and as our founder Amelia Haygood wrote:

“The muses must have been smiling when the quantum leap in Delos’ VRR sound coincided with our first Dallas recording. And how fortuitous that the program, planned long in advance, should include the 1812 Overture in its choral version! The forces that have come together here for this large-scale Tchaikovsky program — the Dallas Symphony under the brilliant direction of Andrew Litton, with the Dallas Symphony Chorus in the splendid Meyerson Hall — have created a powerful introduction to Virtual Reality Recording. What better demonstration could you have than the 1812 Overture with chorus!”

“This disc opens with a terrific performance of a piece that I never expected to be thrilled by again, the ‘1812 Overture’… a wonderful recording that should be an instant audiophile classic.” Fanfare

“The Dallas chorus sing ripely and with an expansiveness at the close that tends to upstage cannon and carillon to make a very lively ‘1812.’ The recording, as one expects from Delos, is rich and spacious throughout.” Gramophone

And here is a comment from Delos’ revered recording engineer John Eargle:

“We are at a new golden age in sound recording, which allows a sense of dimension, space and timbre that takes us a step closer to the wrap-around sound we hear in the concert hall. Delos’ first recording with Andrew Litton and the Dallas Symphony Orchestra is ‘tailor-made’ for our VRR process. What could be more glorious than the Russian Chorale opening of the 1812 Overture? It takes no longer than a second or two to sense the essence of VRR recording: rich, spacious, and above all timbrally correct, qualities that continue through the rest of the program. Quite a tribute to Maestro Litton, his orchestra and hall, and of course to modern technology. And what an auspicious inauguration of the relationship between the Dallas Symphony Orchestra and Delos.”

“Also part of this album is the ‘Moscow Cantata,’ for which the baritone soloist was Vassily Gerello. Little did we know at the time that we would meet up with Vassily again in Russia, or that he would sing the title role in Rachmaninov’s “Aleko” (DE 3269) for us. The ‘1812’ with chorus was an engineering triumph for John Eargle, and became a much-admired ‘surround’ demo. I also remember being amazed at the quality of David Davidson’s DSO Chorus and their coaches. I loved the moment when their language coach stepped quickly to the talkback in the control room and corrected a vowel sound, saying ‘You’re beginning to sound Ukrainian there!’ ”

And another review quote:

“…a very rich and expansive sound due to creative microphone placement. The performance is simply stunning as well, charged with energy and excitement. The electrifying young conductor Andrew Litton uses the choral version of the overture, which is rarely recorded. Also included on the disc are a rarely performed Coronation Canata written for Alexander III of Russia in 1883, and a suite arranged by Litton of some of the composer’s best-loved melodies from the ‘Sleeping Beauty’ ballet. The ‘Waltz’ is absolutely luscious.” —The Sun