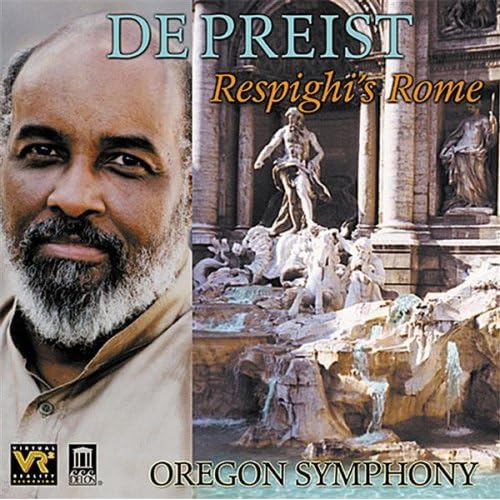 “Respighi’s popular showpieces provoke virtuoso playing in a spectacular recording (headline)…Delos offers a triumph. The sound has a sensuously velvety, wrap-around quality that is both warmly atmospheric and finely detailed, helped by a sharp terracing of textures to make the sound both immediate and vividly realistic. …the Fountains of Rome, with its gentle opening…the clean separation of the recorded sound immediately conveys a fine sense of presence…DePreist, over the years since he became music director of the Oregon orchestra in 1980, has built it into a virtuoso band more than able to hold its own in any international company, presenting these showpieces with just the sort of panache that they need.” —Gramophone

“Respighi’s Rome,” Respighi’s colorful Roman Trilogy, is one of our favorite Virtual Reality Recordings (VRR) (See our first VRR 37-for-37 by clicking here) with James DePreist and the Oregon Symphony. Others in the VRR series with the same artists include Korngold’s “Sea Hawk” Suite and Symphony Op. 40 (DE 3234) and Stravinsky’s “Rite of Spring” and “Firebird” Suite (DE 3278). We’re not alone in celebrating this Roman Trilogy recording, as the rave quote from Gramophone affirms.

“Respighi’s Rome” also has a bit of Delos history. In 1987 we made our first recording with Jimmy and the OSO: an album we called “Bravura,”(DE 3070) that won superlatives from every corner of the globe. It was an Ovation “Recording of Distinction;” and Bert Whyte of Audio proclaimed: “James DePreist’s incandescent performance and John Eargle’s spectacular engineering blaze new trails in the musical sonic firmament.” The lead piece on the album, Respighi’s “Roman Festivals,” became an audiophile benchmark.

15 years later we completed the Respighi Roman Trilogy with new DePreist/OSO recordings of “Pines of Rome” and “Fountains of Rome,” which were recorded with John Eargle’s VRR process, thus making “Pines” and “Fountains” audiophile benchmarks as well. It was a great satisfaction to Amelia, John and everyone at Delos to have Jimmy’s memorable versions of the three Respighi favorites together at last.

“The Fountains of Rome was the first of Respighi’s works to fully reveal his distinctive gifts, including a genius for vivid pictorial writing and one of the century’s most sophisticated orchestral palettes. The first panel of Respighi’s ‘Roman trilogy’ is a celebration of four of the City’s famous fountains, ‘contemplated at the hour in which their character is most in harmony with the surrounding landscape, or in which their beauty appears most impressive to the observer.’

“Compared to Fountains of Rome, Pines of Rome was conceived on a far more ambitious scale, as the purpose of the work was not to paint nature pictures but to evoke visions stimulated by various Roman scenes. To the huge, post-Romantic orchestra of the Fountains, Respighi added a large complement of extra brass players together with piano, organ, and the actual recorded sound of a nightingale, which technically makes the Pines the first known example of electronic music. Like the Fountains, the Pines of Rome is cast in four movements which are played without pause.