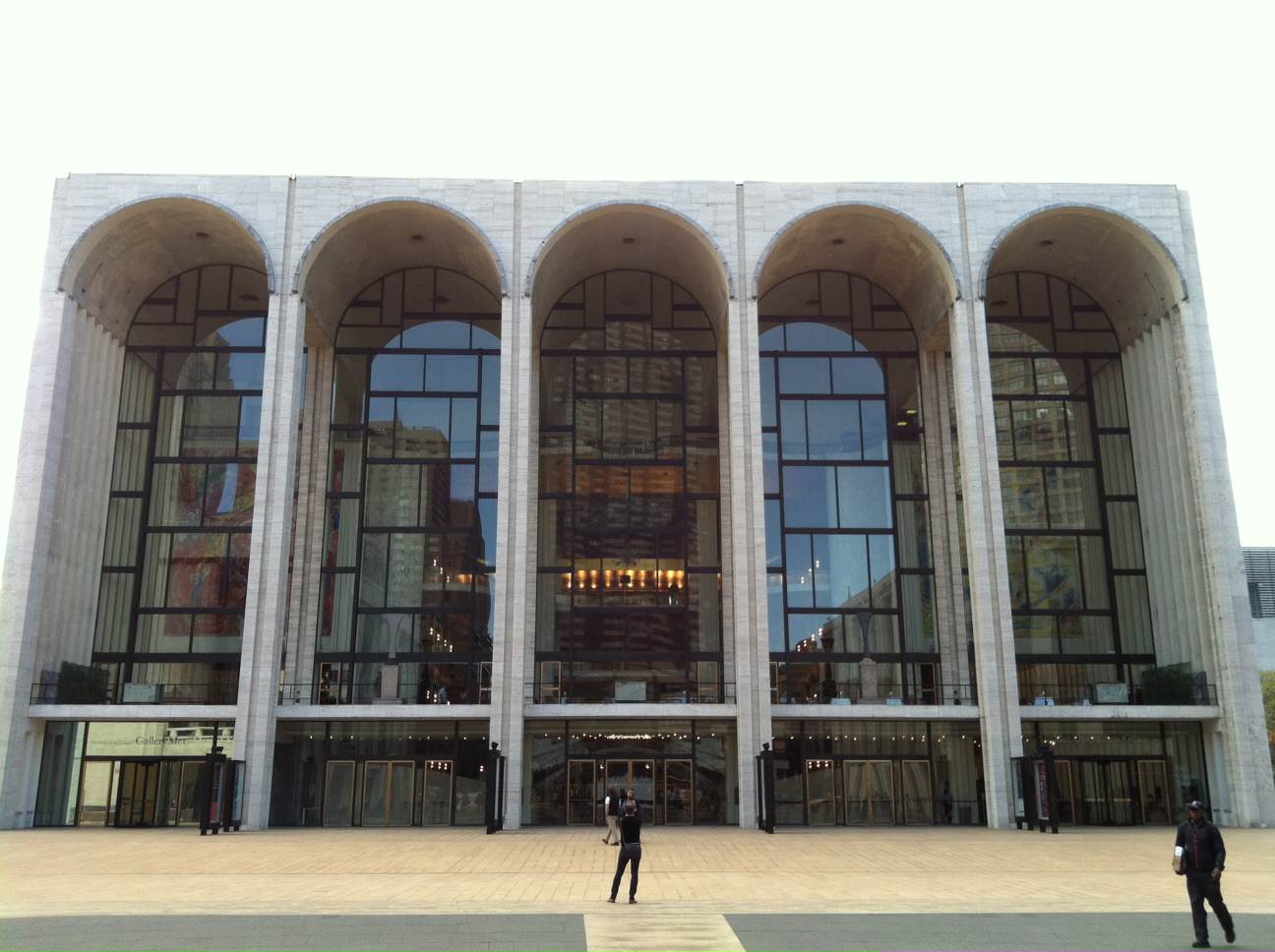 My role at Delos comes with its distinct pleasures, the most rewarding of which is that I get to work routinely with some of the world’s very finest vocal and instrumental artists. And an associated perk is that, every now and then, I get to personally see and hear them in action.

So, when I learned that three of our most notable operatic superstars – baritone Dmitri Hvorostovsky, soprano Sondra Radvanovsky, and tenor Marcelo Alvarez – were appearing at New York’s Metropolitan Opera during April, I lost no time in planning a five-day “working boondoggle” to the Big Apple, timed so that I could catch them all in three different operas two nights running. How could I resist? Never before have that many Delos opera stars graced the Met’s stage in a single month! 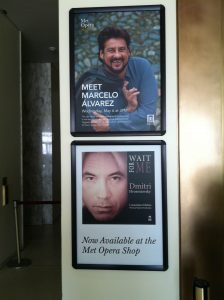 On Tuesday, April 28th, I was privileged to witness Sondra and Dmitri in Verdi’s gripping operatic tale of jealousy-fueled regicide, Un Ballo in Maschera. But, on my way in, what to my wondering eyes should appear just outside the Met Gift Shop entrance but a BIG double poster devoted to Marcelo and Dmitri, just as you see it here in my iPhone snapshot.

How gratifying that, during the entire week I spent prowling around Lincoln Center and environs, the first thing to meet the gaze of anybody entering the Met on the gift shop side was that very same prominently displayed pair of posters. Now THAT’S quality exposure!

Don’t look for formal reviews from me here. You’d be entirely justified in taking anything I told you with not just a grain of salt, but a whole shaker full! But I can tell you that all three of our artists fully lived up to the lofty standards that critics and opera fans worldwide have led us to expect.

The only momentary letdown in Un Ballo was the announcement that the scheduled conductor, the great James Levine, was indisposed and forced to cancel. But his very big shoes were admirably filled by the highly esteemed veteran Met maestro John Keenan. Sure enough, under his deft baton, the fabled Met orchestra positively glowed – and he did a splendid job of keeping soloists, orchestra, and the fabulous Met chorus in perfect synch and spirit.

Dmitri and Sondra took turns providing repeated shiver-me-timbers moments throughout their Ballo performance; Sondra with her exquisitely floated high pianissimos swelling into her hallmark robust tone – and Dmitri with his burnished sound, incredible breath control and impeccable sense of musical line. Seeing them in action only reinforced the often-heard claim that, in their respective vocal categories, they are THE leading interpreters of Verdi’s art before the public today.

And it just so happens that, among Delos’s many notable recordings of these artists (individually as well as together), both our CD, Verdi Opera Scenes – and our DVD, Hvorostovsky in Moscow (with Sondra as guest artist) – feature the famous Act III duet between the Count and his wife Amelia. And this is but one example of the crackling chemistry that this distinguished duo consistently generates, both in recordings and onstage.