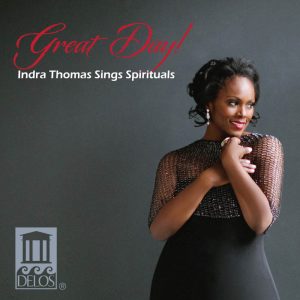 Spirituals are in my blood; as a longtime church vocalist, I have sung them regularly (and joyfully) since childhood. As a native of Charleston, SC (where much important work has been done in the preservation of spirituals), my love of the genre knows no bounds. And the same can be said much more emphatically of celebrated American diva Indra Thomas.

In my teens, my father introduced me to recordings of solo spirituals by legendary vocalists like Paul Robeson and (especially) the great Marian Anderson, of whom he said, “You’ll never hear spirituals done better.” Ever since, Anderson’s renditions have stood as my personal (and probably the world’s) benchmark of solo spirituals done right. I’ve since heard most other available collections of them over the years, often from distinguished artists – but none of them have quite stacked up to Anderson’s. That is, until now.

Indra Thomas grew up in Atlanta, the daughter of a minister. Though she was not active in church choirs, her mother – a gifted amateur singer and her first voice teacher – saw to it that she was exposed to spirituals at home from an early age, encouraging her to learn them by rote. As Indra noted in a recent conversation, “Spirituals were of special benefit to me in my development as a soloist. Thanks to my mother, I was totally comfortable performing them – and that helped me to gain confidence in front of audiences, and to learn to sing naturally and spontaneously.”

Ms. Thomas brings to these selections levels of sheer vocal beauty, intense emotional power and sacred sincerity that I can’t recall ever hearing in solo spirituals before — not to mention the full force of her African-American stylistic heritage, without which spirituals never seem to sound quite right. When I asked her what it felt like to perform them, she replied, “It’s almost an instinctive, out-of-body experience for me. I feel totally connected to what I grew up with – and I still feel, like I did then, as if God is working through me – using me as His extension to reach my audience and touch their souls.”

And that, dear readers, is what spirituals are all about. I feel incredibly fortunate to have been involved in this album’s production, and it has been the rarest of personal pleasures to work directly with Ms. Thomas in the preparation of this recording’s liner notes.