About the AMBAR Group 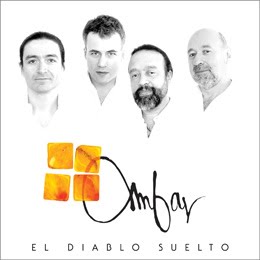 Since the AMBAR Music Group recently recorded their debut Delos album “El Deiablo Suelto” we thought it would be prudent to give the group itself a proper introduction:

The AMBAR group is the result of a collaboration of three Colombian musicians and a Russian violinist. Each one of them contributes to the group in a singular way from his personal experience. In addition to their classical training, some of them have also been involved from a very early age in traditional music. The group’s repertory is carefully chosen in a way that allows each member to express their individual personalities, thus offering an original interpretation at each performance.

AMBAR currently performs a wide repertory of Latin American music in which three countries are emphasized: Colombia, Venezuela and Brazil.

Colombian music is represented by the Bambuco and the Pasillo or Colombian Waltz, indigenous to the Andes Region, the Cumbia and the Porro from the Caribbean coast and the Joropo from the Oriental region. This region, through which the Orinoco River passes is a great valley shared by Colombia and Venezuela as a single culture. Besides this region, Venezuela is represented in the group’s repertory by the Vals Venezolano.

The AMBAR group also explores the Brazilian Choro. This genre had a great popularity at the beginning of the 20th century in the same way as Bambuco and Pasillo did in Colombia. Choro means “lament” in Portuguese. This “saudade” (nostalgia) filled music is a major part of their repertory, as well as more festive music!

Since the formation of Ambar in 2000, the group have performed at many prestigious festivals and in concert halls throughout Europe, including Salle Gaveau in Paris and The Tchaikovsky Hall in Moscow accompanied by State Academic Chamber Orchestra of Russia.

For more information, please view the AMBAR MySpace page, and for more streaming tracks from their Delos release, please visit the AMBAR Website!