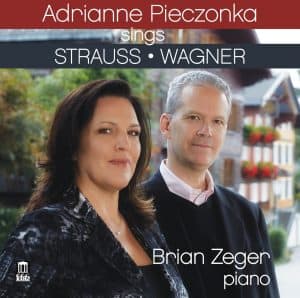 In Adrianne Pieczonka’s first release with Delos she blesses us with a captivating and varied program of songs by Strauss and Wagner. Particularly fond of the art song genre (and of the soprano voice), Strauss created 158 of them throughout his long life, and many of his dozen songs heard here are among his true masterpieces. The opera specialist Wagner, on the other hand, wrote far fewer songs than Strauss. Best-known among them are the five songs of the ecstatically romantic Wesendonck-Lieder, also considered a masterpiece among Lieder cycles.