American Record Guide Reviews All The Heart Of Me 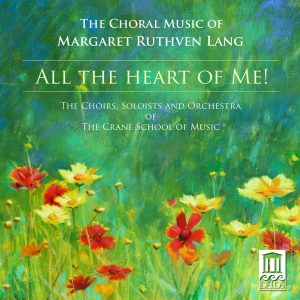 American Record Guide critic, Philip Greenfield has a new review for All the Heart of Me: The Choral Music of Margaret Ruthven Lang:

“Sometimes a good story can make the music oh-so-much-more interesting. … Some of the Lang catalog has been reassembled—27 choral works survive—so we are treated here to a healthy sampling of what’s left. Her music is the juicy sort of stuff that singers like to sing, and it’s never in a rut. Styles shift to meet the demands of the texts. When Lang wanted to craft stiff-upper-lip Episcopalian fare, she could go Anglican with the best of them, as in her stately Te Deum. For a lush, romantic depiction of the Christmas miracle, she brought on a choir of angelic sopranos to warble and coo over the Christ Child (‘The Heavenly Noel’). But when she wanted to remove all excess and go straight for the simple beauty of the incarnation, she com- posed a lovely ‘In Praesepio’ that any of us would be pleased to hear on Christmas Eve. And you can be sure that her ‘Irish Love Song’ and ‘Irish Mother’s Lullaby’ had more than a few ethnic Bostonians sniffling up a storm on St Paddy’s Day. The cello obbligato in that Lullaby, by the way, is performed here by Natasha Farny, a great grandniece of Margaret Ruthven Lang. As I said, a good story never hurts the music. … The Crane School of Music of the State University of New York at Potsdam has come together with all its flags flying to put this program together. The soloists—mostly voice teachers at the school—are very good, as are the instrumental accompaniments.… a winning case is made for the choral legacy of Margaret Ruthven Lang.…” —Philip Greengield, American Record Guide