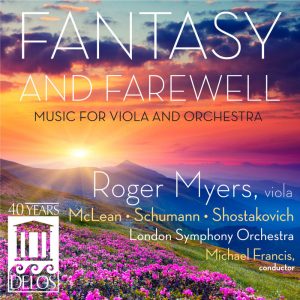 “[Michael] McLean writes eloquently for the viola using tonal harmonies that could be referred to as “postmodern” (rather than neo- romantic). The orchestration is lush and recalls epic 21st-Century film music, with prominent horn parts and rich solo parts for the winds. … This attractive piece (Suite for Viola and Orchestra), recorded here for the first time, is certainly a welcome addition to the growing literature for solo viola and orchestra.

“McLean’s orchestration of Robert Schumann’s Marchenbilder, Op. 113, is a masterpiece. The viola part remains exactly the same as the original (it was originally written for viola), and the orchestration seems informed by Tchaikovsky and Dvorak, in all the best violin-concerto-like ways. … I find myself smiling through the whole piece, wishing it would never end.