An Introduction to Operatic Fantasies 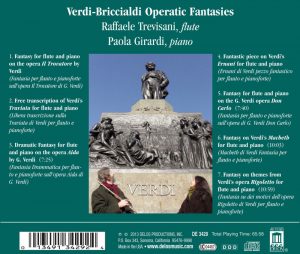 While transcriptions for certain solo instruments of popular operatic arias and instrumental sections had been around since the late seventeenth century (i.e., early French opera transcriptions for organ), the widespread practice of operatic transcriptions (often called “fantasies,” as they are here) intensified considerably across Europe as the Romantic era took shape in the early 1800s. As with so many of his other pioneering contributions to music history, Franz Liszt – the supreme pianist of his day – probably did more to promote the popularity of virtuoso transcriptions than any other musician. Beginning in the early 1830s, he practically invented the solo instrumental recital, bringing music that had hitherto been restricted to more intimate salons and soirées to public concert stages for the first time. This opened a floodgate of transcribed music from accomplished players of other instruments well suited to solo performance: violin, flute, clarinet, oboe, etc. And by far the most popular basic musical materials for such transcriptions were the famous arias or other appealing primary themes from the most popular operas of the day. After all, opera was then the predominant musical craze; their most memorable melodies being something like today’s smash-hit pop tunes among the general public.

It should be noted that transcriptions of these “hit tunes” were adapted either as theme-and-variations pieces, or as single or multiple melodies arranged within a single piece; as such, they served a variety of purposes and functions. Perhaps their most immediate purpose was to serve as the basis for flashy and technically spectacular vehicles designed to show off the composer-performer’s own virtuosity and musicianship, thus generating further public demand for their concerts (as well as the bigger fees that came with growing public adulation). At the same time, many composers produced such transcriptions to pay personal homage to the great opera composers of the day, and – by presenting concerts in smaller towns and cities that lacked opera houses – to further spread public popularity of their best melodies. Finally, in most cultured households of the aristocracy and the rapidly emerging middle class, amateur musical accomplishment was considered a “social virtue” – and performing music en famille remained a popular domestic pastime. Accordingly, accomplished amateurs comprised a steady market for assorted chamber works and arrangements of many other kinds of music (like Liszt’s Beethoven symphony transcriptions): a market that music publishers of the day took full advantage of. Thus many such virtuosos (and their publishers) achieved not only more widespread fame, but considerable fortune as well from their transcriptions.