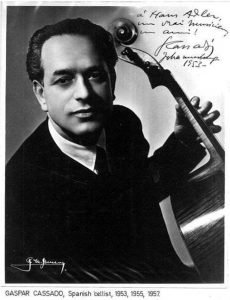 It would be hard to imagine putting together a collection of Spanish music for cello without including any works of Gaspar Cassadó, a child prodigy cellist from Barcelona. At the age of nine he began studying cello with the great Pablo Casals after Casals heard his first public performance. He later studied composition in Paris with Manuel de Falla and Maurice Ravel.

The three original Cassadó works presented in this program are quite distinct in style. In the Sonata Nello Stile Antico Spagnuolo (sonata in an old Spanish style), the composer creates a kind of fusion of late Baroque and the classical era’s “stile galante,” mixed with romantic harmonies, resulting in a work not unlike other fashionable pieces of the twenties and thirties by composer-performers such as Fritz Kreisler or Henri Casadesus. Danse du Diable Vert is a virtuosic showpiece for cello, with a playful, mischievous air. The opening theme has a pentatonic quality that creates an exotic flavor. Requiebros, perhaps Cassadó’s best-known work, is romantic in style and strongly Spanish in character. Its title refers to flirtatious compliments or flattering comments, and the spirit is one of exalted nobility.

Spanish Music for Cello and Piano

Distinguished cellist Andrew Smith’s interest in Spanish music was awakened by his collaboration with Spanish pianist and conductor Alfredo Oyágüez Montero beginning in 1999. This artistic partnership led to a program of all-Spanish works, which they have performed to great acclaim on tour worldwide.

The album features music by several of Spain’s greatest composers: Manuel de Falla, Enrique Granados, Joaquin Turina, and Xavier Montsalvatge. Perhaps less familiar is Gaspar Cassadó, who – after the great Pablo Casals (his teacher) – was Spain’s most famous 20th-century cellist. Prime examples of both his original compositions and his many arrangements are heard here, along with a lovely folk song transcription from Casals.

This glowing release promises to be a rare treat for cello fans and Spanish music aficionados alike – and will convincingly demonstrate the cello’s affinity with the unique spirit and piquant favors of the Spanish musical idiom.