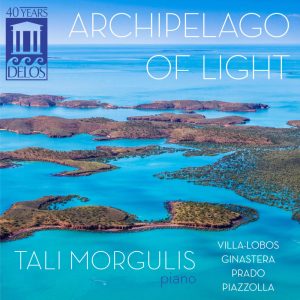 Tali Morgulis has appeared in Italy, Belgium, Switzerland, Croatia, UK, Israel, China, Taiwan and the United States as a soloist and chamber musician. After her recent recital at St Martin-in-the-Fields in London she was described as “a pianistic firecracker” and her performance of the Tchaikovsky Concerto with the Thüringen Philharmonia (Germany) as “full of power and emotion.” Tali’s additional orchestra engagements have included performances with the Kaohsiung Symphony in Taiwan, Haifa Symphony Orchestra in Israel, Padova and Veneto Orchestra in Italy, Zagreb Philharmonic Orchestra in Croatia and the Malaga Symphony Orchestra in Spain.

Morgulis holds top prizes and awards from piano competitions in Croatia, Italy, Spain and the US. She has been a featured artist on WQXR radio in New York and WBGH radio in Boston. She has also recorded works of Rachmaninov, Janacek, Shostakovich and Lutoslawski for the IPA label.

In the fall of 2008 Tali joined the faculty of Moores School of Music, University of Houston, as an Assistant Professor of Piano. Prior to this position, she served on the faculty of Fort Hays State University in Kansas. Variety of teaching activities has taken Morgulis to Taiwan, China, Israel, Croatia and across the US.

A dedicated collaborative artist, Morgulis has appeared in concerts with Shlomo Mintz, Vadim Gluzman and Stefan Jackiw. As a guest artist, she performed with the Borromeo Quartet in Jordan Hall in Boston, and with the Jupiter Chamber Players in New York.

Tali began her music studies at the age of four in her native Ukraine. At 15, she immigrated to Israel where she continued her music education. She received her Bachelor and Master Degrees from the Samuel Rubin Academy of Music in Tel Aviv and a Doctorate in Piano Performance from the New England Conservatory of Music in Boston. Her studies were generously supported by the America-Israel Cultural Foundation. She has studied with Esther Balasha, Michael Boguslawsky, Wha Kyung Byun, Lev Natochenny and Patricia Zander.