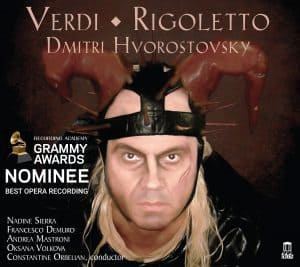 The Armenian Mirror-Spectator has a new interview with Constantine Orbelian in light of his third GRAMMY® nomination, “Best Opera Performance”, for Verdi’s Rigoletto. See his reason for wanting to do a recording of the work, and then read the full interview on mirrorspectator.com:

First of all, I love opera and love Verdi. What appealed to me most is Dmitri Hvorostovsky’s incredible interpretation of the title role. I had heard him perform “Rigoletto” in London and at the Metropolitan Opera House in New York, and I was at his very first “Rigoletto” in Moscow, at the Novaya Opera Theater, in 2000. Dmitri was one of the GREAT voices and GREAT interpreters of the music of Verdi. He infused the role with so much pain and heartache that one immediately bonded with the poor hunchbacked court jester. His performances became legend and brought a new dimension to his “usual” onstage presence of either a prince or a duke or a king. During my 20 years of collaboration with Dmitri Hvorostovsky, I had heard him perform most of the great Verdi roles, whether at the Metropolitan Opera House, Royal Opera House in London, Paris Opera, or Vienna State Opera, not to mention the San Francisco, Chicago, and Los Angeles operas. One of his signature roles was Simon Boccanegra, and after five or six years of him performing that opera around the world, we decided to record it, in 2012. We had a stellar cast including the great Italian soprano Barbara Frittoli, and superstar Russian Bass Ildar Abdrazakov, and the superb Italian tenor Stefano Secco. The recording was met with great critical acclaim in the press and became a new benchmark for that particular opera. After Dmitri’s tragic diagnosis of brain cancer, in June 2015, he told me he must do two things before he couldn’t sing any longer: he must record “Rigoletto” and an extraordinary vocal cycle by Russian composer Georgy Sviridov. So I began planning to do both recordings in the summer of 2016. We first recorded the “Rigoletto” in Kaunas, and then flew to St. Petersburg to record the Sviridov CD.Dmitri was a true musical and vocal genius. He respected his art and expected total dedication to the work at hand. Having said that, he was extremely easy to work with and was the ideal colleague. He respected his colleagues and helped shape their interpretations to make a “whole” and total vision of the opera. Since there can never be “too many ears” at a recording session, we had our great friend and musical colleague John Fisher from the Metropolitan Opera with us at the recording sessions, preparing us before each session. He had worked with Dmitri  for many years, and has the most invaluable experience in being the musical consultant and coordinator in some of the most important opera recordings of the 20th century – including ours!

See the full interview on MirrorSpectator.com