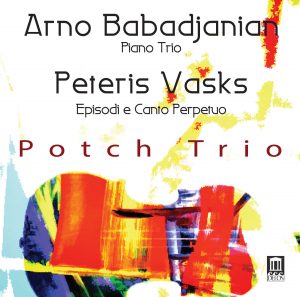 About the Babadjanian and Vasks Piano Trios

The two works on this CD are representative of the significant amount of twentieth-century chamber music that is highly accessible. It is surprising to many people because of the unfortunate perception that radical experimentation and innovation, not to say revolution, are the hallmarks of twentieth-century art music, if it is to be worthy of any serious consideration.

In fact, the vast majority of chamber music composed in the twentieth century is writ-ten in a familiar tonal language and is quite romantic in character, that is to say, has expression of feelings as a primary aim. Peteris Vasks has been quoted as saying that music is an emotional art: “if there is no emotion, there is no art.” Similarly, much of the music of Arno Babadjanian, stemming from the post- World War ll era, is uninhibitedly romantic, even nostalgic. It is said that the beautifully intimate and poetic second movement of his Piano Trio was meant to express his profound gratitude for having recovered from terminal illness. Whether or not that is true, the fact is that the music speaks of strong feeling; yearn-ing to be expressed immediately and directly.

It seems that more and more composers are preoccupied less with experimentation, novelty and innovation than with expressing their aesthetic impulses and their emotions, including their reactions to the wonders and the tragedies of the world they live in. It has become more a search for authentic expres-sion than for novel means of construction. Many fine composers, largely ignored by academia, have been content to use a familiar language in a modern way, much to the relief of listeners world-wide, who are discovering that their century is filled with music that is both strikingly relevant and accessible, judging from the popularity of composers like Pärt, Gorecki, Tavener, and Kancheli.

The two works on this CD are perfect examples. Both are written in a familiar language, yet are recognizably of the modern age, and both are expressions of the journey through pain and suffering to something positive – whether we call it hope, faith, resolution, acceptance, or peace. Both recognize suffer-ing as well as bliss. Both emphasize beauty. Arno Babadjanian was born in 1921 in Yerevan, Armenia, and died in 1983. Initially, he studied in his native country (under Talyan), and later went to Moscow to study with Igumanov and Lytinski. Having studied piano at the Moscow Conservatory, he gained wide recognition after graduation as a pianist of outstanding ability. He started his formal studies as a composer at the House of Armenian Culture back in his native Yerevan, where he was appointed as a teacher.

His music abounds in folk-like themes em-ployed with dramatic pathos and romantic excitement. In the West, he is probably best known for his Piano Trio (1953), his Sonata for Violin and Piano (considered by many to be among his finest works), his Armenian Rhapsody for two pianos composed in col-laboration with his good friend Alexander Arutunian, and his Cello Concerto, which was recorded by Rostropovich. His oeuvre also includes works for solo piano, for piano and orchestra, a violin concerto and three string quartets. His songs are quite popular in his native country.