Behind the scenes of J.S. Bach Flute Sonatas with Continuo 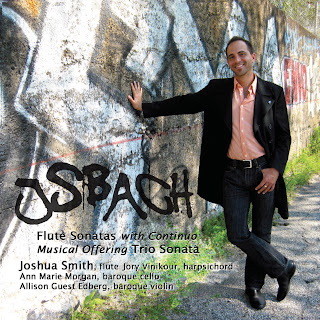 This past July, ClevelandClassical.com published the fantastic piece “Preview: Recording in Cleveland—the making of Joshua Smith’s second Bach CD.” We will excerpt a few small portions of it here, but we highly recommend reading the full article on www.clevelandclassical.com!

“…[After] J.S. Bach was released on Delos was released on the Delos label in October, 2009 to critical acclaim…[Joshua Smith said] ‘The first Bach disc ended up being perfect’ and inspired him to take on disc no. 2…

…Disc no. 2 would add violinist Allison Edberg and cellist Ann Marie Morgan for continuo sonatas and the Trio Sonata from ‘The Musical Offering’, and like the previous disc, would be recorded at First Baptist Church in Shaker Heights.

The sessions were scheduled during the middle of April – taking profit of the musicians’ appearance on the Baldwin-Wallace Bach Festival but also during a rather intensive week of performances and recording sessions with Mitsuko Uchida at Severance Hall. The schedule became even tighter for logistical reasons: Erica Brenner decided to avoid any sessions between 2 and 5 in the afternoon – learning from the team’s earlier experiences with school busses and other traffic noises in the neighborhood.

The tight scheduling also didn’t allow for a lot of rehearsal time before the group went before the microphones. ‘You need to work with musicians who are at the top of their game’, Joshua Smith noted. ‘If you take some artists out of their comfort zone, they’re not able to function. You need to be able to adjust and adapt quickly.’…

…At the time this article was written, the production team has finished the first edit and all the musicians have been listening to the second. Brenner notes that as a flutist, she needed to learn ‘to listen from the bottom up rather than just listening to the flute. Then I find myself listening to one part at a time.’ In critiquing the edited versions, Brenner notes, ‘you have to have a good perspective – confidence and a healthy understanding of what is important.’ Things can be made nearly perfect, but ‘you can easily end up with something sterile.’ Knab agrees. ‘In post-production you hear things you make judgments about but don’t have to take action on. I ask myself, “is this great enough for a world-class recording?” Smith also tries not to obsess about microscopic flaws that remain. ‘99% of people will not notice.’

During the next few weeks, the process will result in a version the entire team is happy with, and the disc will enter the mysterious process of “mastering.” Tom Knab says “that could mean blessing it and sending it off to the company as is, or it might mean adjusting levels between pieces and mitigating any noise, if possible.” And so Bach is sent off via a PreMaster CD or DDP (Disc Description Protocol – the DVD form of a PMCD), for replication and packaging. And by sometime in the fall, fans of Joshua Smith will be able to enjoy his latest recording of Bach’s flute music.”