Behind the Eyes of Brahms 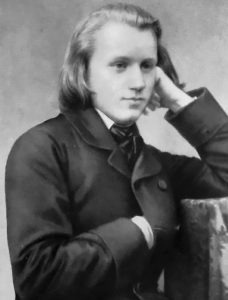 Johannes Brahms was photographed frequently during his lifetime, and took pleasure in sharing candid photos with friends. In this professional portrait from 1853, the single feature often noted by his contemporaries is evident: his powerful gaze.

Whether clean-shaven or—after 1876—bearded, he garnered compliments for his eyes. One observer described the young man’s “fine brow with flashing blue eyes … [and seen standing] apart in pleasant company, an unconscious force would emanate from him.” As he aged, his short stature and casual dress could distress his friends, yet his eyes kept their appeal. Sir Isidor George Henschel—baritone, conductor, and close friend reported: “What struck me most was the kindliness of the eyes. They were a light blue; wonderfully keen and bright, with now and then a roguish twinkle in them, and, yet, at times, an almost childlike tenderness.” C. V. Stanford, an Irish-born conductor and advocate for Brahms in England, described the composer’s eyes during his final years as “astonishingly deep and luminous velvet.” (Michael Musgrave. A Brahms Reader. Yale Press, 2000: p. 5.)

Yet, despite the directness with which the composer meets his observer in numerous images, Karl Geiringer, a prominent twentieth-century biographer, dubbed him “Brahms the Ambiguous.” This ambiguity reflects the shifting musical values concurrent with his maturity, making it unclear whether to consider him conservative or progressive. Brahms compounded this ambiguity with apparent expressions of self-doubt and his destruction of numerous finished compositions as well as unfinished pieces and sketch materials. If self-doubt was his motivation, it is curious that he did not seem worried about the survival of a substantial record of correspondence. 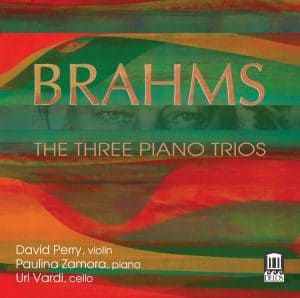 This material reveals his reliance on friends from whom he sought unvarnished opinions of his works-in-progress, underscoring the composer’s respect for connoisseurs and professional musical friends in equal measure. An engagement with both amateur and professional musicians sprang naturally from Brahms’ lifelong engagement with performance. A pianist of considerable accomplishment, he was, however, not among the leading virtuosi of his day. Chamber music was the genre for which he was most celebrated as a composer and the one that offered him great personal pleasure. He appreciated that professional musicians would be cognizant of emerging musical styles, whereas dedicated amateurs, many among the prominent intelligentsia, embraced the prevailing aesthetic preferences. Serving both forward-thinking musical trends and the pleasures of private engagement with music was no easy task, but remained central to his compositional projects.

And through it all, he cheerfully preferred to live among the emerging bourgeoisie, rather than assume the mantle of “celebrated artist.” The struggle to create music that addressed both the pleasures of highly sophisticated, yet amateur taste and the desire of professional musicians for works suitable for large public concerts factored into his progress on the works of his mature style, particularly the remarkable string quartets, violin sonatas, piano quartets, and piano trios. In each instance, these magisterial triptychs are unified by an overarching sense of chamber style, yet at the same time, are distinctively individual. The three piano trios, in particular, preserve a lifelong engagement with two sensibilities.