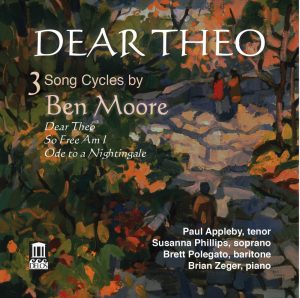 While a single song can open a window to new worlds in and of itself, a song cycle can go beyond that and take the listener on an extended psychological and emotional journey.

This album includes three recent song cycles: Dear Theo, So Free Am I and Ode to a Nightingale. Each represents a distinct approach to the form. Dear Theo consists of seven songs that set passages from the letters of Vincent van Gogh to his brother Theo; So Free Am I comprises six settings of diverse poems by women from various time periods; and Ode to a Nightingale sets to music the great poem by John Keats in eight songs, essentially one for each of the eight stanzas.

As distinctly different as these cycles are, they have themes in common. One is the concept of freedom, or the longing for freedom. In Dear Theo, passages from Van Gogh’s letters (translated into English from the original French and Dutch) express deeply held feelings that Vincent revealed to his brother, who was also his benefactor. The longing for freedom is ever-present: freedom from the financial constraints that burdened him throughout his life and freedom from the many barriers that he believed hindered his expression. Vincent persevered, even though he had no idea of how hugely popular and influential his work would become. I have tried to emphasize this poignant fact in the songs.

In So Free Am I, the voices of women are heard in poems that span many centuries. Commissioned by the Marilyn Horne Foundation in 2005, the cycle addresses, in very different ways, the longing to be liberated from the oppression of women that has prevailed for millennia. The title quotes the first line of “Mutta,” from writings of Indian Buddhist nuns of the sixth century B.C. (translated from the ancient Pali language). Even from across the centuries, these words still resonate powerfully. The phrase itself inspired a musical figure that appears in many of the songs serving to unify the cycle.

The longing to be free is also explored in Keats’ Ode to a Nightingale. The nightingale, singing of summer “in full-throated ease,” may embody freedom in its most idealized form. But the more one studies this great work of literature, the more levels of meaning come to light. I hope the listener will accept my particular response to these words which encompass so much of human experience.

Finally, in a bonus track, I have set Yeats’ great poem, “The Lake Isle of Innisfree,” which might be viewed as the ultimate longing for freedom: the sound of “lake water lapping” in “the deep heart’s core.”