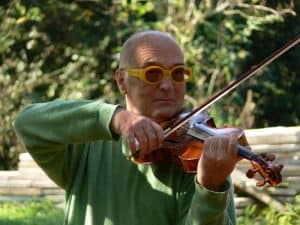 Of all the countless artists who revere the memory of Nadia Boulanger and have sought to pay homage to her singular musical influence and to preserve her legacy, few (if any) have done so in such a unique manner as Bruno Monsaingeon. Known primarily for his candid and revealing film documentaries about many of the 20th century’s greatest musicians, he honored Mademoiselle twofold, producing both a film and a book about her.

Upon receiving copies of Mademoiselle – Première Audience from Delos, he responded with the following:

“My surprise is enormous. Although I did know a few works by “Mademoiselle”, mainly by reading the scores of some of her Songs which have been published, I did not expect to hear such an abundance of really beautiful music.

No doubt, this had to do with her own frequent statements – some of them made directly to me – according to which her “…music was useless, not even badly made, but useless…”. “Ma musique n’était pas même mal faite, mais inutile…”

I must say I do not entirely disagree with her, in the sense that it is indeed music largely influenced by composers of her youth, and which does not bear the stamp of a completely original signature; but it is indeed at its best music of intense beauty which should not be neglected, in spite of her author’s lucid but far too severe judgement.

The issuing of these two CDs is therefore a tremendous contribution to the knowledge of this extraordinary woman’s creative world and to the perpetuation of her memory.”