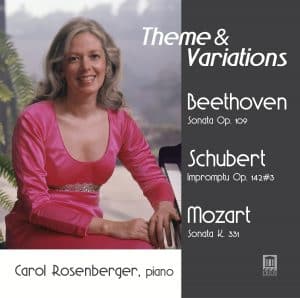 I recorded this Themes & Variations program in 1997, as a “Companion Disc” for a children’s album entitled “…such Stuff as Dreams…” the children’s CD itself was a sequel to the earlier “Perchance to Dream,” which had been the beginning of the Delos Young People’s Series a few years earlier. The repertoire for both children’s programs was chosen very carefully. I wanted each track to contain a masterpiece — serene, innocent, simple and of course melodious throughout.

For “…such Stuff…” I was tempted to include three wonderful themes from some of my favorite theme-and-variations masterpieces by Mozart, Schubert and Beethoven.They had all of the desired qualities mentioned above, but I hesitated about extracting them from their musical contexts. Then Delos founder Amelia Haygood and I hit upon the idea of letting the lovely themes be part of the children’s disc, and during the same sessions, I would also record the entire works built on these themes for a second “Companion Disc.” We hoped that some of the young people, or adults encountering this music for the First time, would want to take the leap and become acquainted with the complete works.

Now, some 17 years after the release of “…such Stuff as Dreams…” it has been suggested to me that it is time for the “Companion Disc” to have its own identity as an all-ages CD. In the three sets of variations, the themes have a masterful simplicity about them. The Schubert theme seems to take your hand and guide you into a beautiful natural landscape; the Beethoven theme, in its encompassing warmth, enables you to fuse your inner being with the universe, somehow. Both the Schubert and the Mozart melodies bring joy and pleasure. Mozart’s elegantly simple theme is perfection itself, and gently finds its way into your heart.