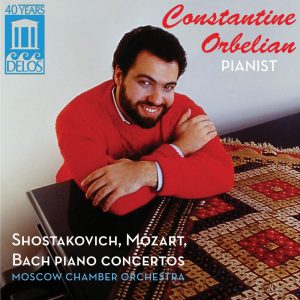 When Dmitri Shostakovich (1906-1975) produced his Concerto No. 1 in C minor for Piano, Trumpet and Strings, Op. 35 in 1933, he was on top of the musical world in Russia. Not only that, but at age 27, he was already a composer of international renown, in the wake of the Symphony No. 1: his glittering student masterpiece. In these post-revolutionary years, Soviet Musical culture was still sorting itself out, and Stalin’s cultural goons had not yet begun their systematic terrorization of their nation’s finest composers. Several years earlier, he had gotten a mild official “hand-slap” for his Tahiti Trot (his witty and whimsical take on “Tea for Two”), but the young genius was not to feel the regime’s full wrath until Stalin and company viciously condemned his second opera, Lady Macbeth of Mtsensk, in 1936.

From then on, Shostakovich was forced to walk a tenuous artistic tightrope for the rest of his life, struggling to balance his creative integrity against the Kremlin’s cultural dogma. But for now, his work – including two more regime-pleasing symphonies and his satirical opera The Nose (plus popular ballet, film and stage scores) had made him one of his country’s musical darlings. And it was under such comparatively sunny circumstances that his first piano concerto came to sassy and vibrant life.

First performed in 1933 in Leningrad (St. Petersburg) with the composer (also a brilliant pianist) at the keyboard, the work is full of burlesque swagger and impish, often sardonic humor. Even then, Shostakovich understood the official predilection for crude, even banal themes – but part of his genius was his ability to elevate the banal into the realm of art. And so it is often the case here, with a good bit of “common” musical material transformed into episodes of brain-teasing sophistication.

But there are quite a few instances of more exalted thematic material as well, owing to the composer’s well-known habit of borrowing themes from other composers, as well as from his own works. Here, he both begins and ends the work with modified themes from Beethoven: the first movement’s opening downward piano triad was apparently inspired by the opening bars of the “Appassionata” piano sonata, and the concluding frantic passages of the finale are based on his G Major Rondo a Capriccio, popularly known as “Rage over a Lost Penny.” In between, there are quotes from several of Shostakovich’s earlier scores – and even a tid-bit from Haydn.

Following the first movement’s brief opening bright splash, the initial Beethovenian theme tries to cast a somber overall mood – but Shostakovich doesn’t let that happen, leading the theme instead into material more typical of a music-hall. The trumpet enters, with intermittent snippets reminiscent of jazzed-up military bugle calls. The original theme reappears here and there, tugging the music back and forth between serious and saucy. It should be noted that the trumpet has not yet become a full partner to the piano at this point, instead providing mostly irreverent musical “commentary” here and there. The mood changes abruptly in the following Lento movement, where the music – save for a dramatic and more animated central climax – takes on a consistently subdued and melancholy tone. The trumpet, now muted, enters fairly late in the movement, its pensive melodic musings adding to the prevailing reflective atmosphere.

The very short third movement – and airy episode of seemingly aimless piano noodling leading downward into a somberly throbbing strings passage – serves more as an interlude (or prelude) than a complete movement. But then comes the headlong finale, as the piano and strings explode into a frantic, carnival-atmosphere tumble. The trumpet – still not quite an equal partner to the piano – butts in repeatedly, as if goading the other musicians forward, until it gets its own gauche-sounding dance-tune. From there the musical chicanery piles up, with piano and trumpet seeming to compete as reluctant partners in crime. The final furious flurry of notes leaves the listener hanging on by the fingernails as the combined forces hurtle to a frantic finish.