Constantine Orbelian – To Russia With Love 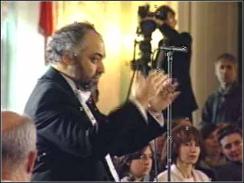 (CBS) The Moscow Chamber Orchestra is one of the crown jewels of Russia. Its conductor, Constantine Orbelian, says its music reflects the traumatic history of the Russian people.

“It’s a special sound we get out of those stringed instruments. There’s something quite poignant about what they produce, this touching type of sound. It’s gorgeous,” Orbelian tells CBS News Sunday Morning Correspondent Eugenia Zukerman.

Orbelian’s reserved conducting style, his stolid demeanor, even his beard – all seem to embody Russia. But this very Russian man was born in California.

Constantine Orbelian was born in San Francisco. He is an American.

How he came to be appointed music director of the prestigious Moscow Chamber Orchestra is a story that begins with his grandfather: a man the Soviet Union once branded “an enemy of the people.”

His grandparents were members of the Communist Party, and revolutionaries. Agaparon Orbelian was swept up in the Russian Revolution, and prospered as a Communist official in an unlikely place.

“My grandfather,” says Constantine Orbelian, “was head of the secret political division of the KGB in the city of Baku, which is on the Caspian Sea. My grandmother was also working on a very important post at the ministry of oil.”

The young revolutionaries would have two sons: One of them was Harry, who was Constantine’s father. Life was good for the Orbelian family, until Joseph Stalin came along.

As Stalin began to annihilate Communist party members in the mid-1930s, Orbelian’s grandfather was arrested. He was killed in 1938. That same year, his grandmother was arrested; she spent eight years in a labor camp for women who were wives of enemies of the people.

When Nazi Germany invaded Russia in 1941, Constantine Orbelian’s father was an outcast. A new chapter in the life of his family was about to begin.

He was drafted into the Russian army to fight for his country and was captured by the Germans in 1941. He spent four years in a concentration camp.

After the war, Orbelian’s father met a young Ukrainian doctor in an American-run refugee camp in Germany. Vera had been taken from her home by the Nazis and forced to work in camps for war prisoners.

Today in Harry and Vera Orbelian’s house in California, there is a Russian feel. But their lives here are an American success story. Harry Orbelian started as a janitor at a San Francisco department store. After 30 years, he would retire as a senior executive, and a wealthy man from real estate investments.

Both of them suffered a great deal, and they went though difficult times in Russia. But they still love Russia…

To continue reading this interview, please click to go to the CBS Sunday Morning News site