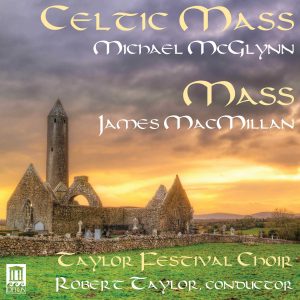 “These two masses have many points in common. Each is divided into nine parts and both bask in a serene atmosphere, where meditation and fervor reign – an intimate fervor, internalized, far different from those masses of the post-romantic era that are almost always laden with Saint-Sulpician ornaments and heavily backed up with orchestral effects.…The excellence of the recordings of these two contemporary masses owes a great deal to Robert Taylor, who founded this choir in Charleston, South Carolina and who also directs the chorus of that city’s symphony orchestra. In keeping with this professional background, he has revived in particular such little-known choral works of Ralph Vaughan Williams as An Oxford Elegy and Epithalamion, setting poems by Edmund Spenser. You will recall that in 1922, the same Ralph Vaughan Williams wrote his important Mass in G Minor, which contributed to the renewal of British religious music in the 20th century – and we can rightly place Michael McGlynn’s Celtic Mass and James MacMillan’s Mass in its wake.” —Jean-Baptiste Baronian, Crescendo Magazine (translation by Dennis Adams)

See the full review on Crescendo-Magazine.be