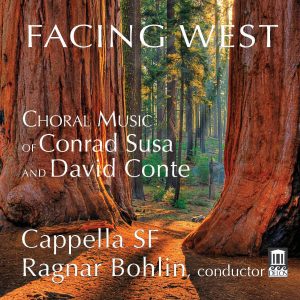 The Composer for unaccompanied chorus was commissioned by The Walden School for Young Composers in New Hampshire in celebration of their 30th anniversary, and was premiered by the Walden School Chorus in August of 2002, conducted by Leo Wanenchak. The Composer speaks to the nature of an artist’s inspiration as something that can transcend personal will or earthbound concerns. The poem’s author (John Stirling Walker) had in mind Beethoven as an example of this quality of receptivity to a heaven-sent creative impulse.

Text by John Stirling Walker
(Music!…O Music!)
In restless moments or in quiet, When the feel or thought draws near, And though the Muse’s will deny it, Comes him music, loud and clear.
(Music!…O Music!)
When, oh, when the world, awaiting, Glistens in the morning dawn,
Or asleep lies, grief abating,
‘Midst the stars that carry on,
Listens he,
and hears
His music,
married to the tones
that he must tarry on.
(Music!…O Music!) 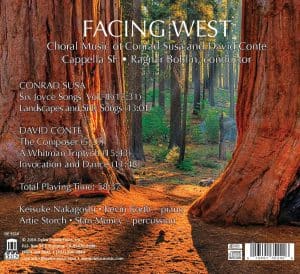 In this – Maestro Bohlin’s second recording with Cappella SF on Delos – his select 24-voice ensemble delivers these two modern masters’ lovely and accessible music to perfection. We get two choice choral song cycles from Conrad Susa: Six Joyce Songs, Vol. II, as well as Landscapes and Silly Songs (with texts by Federico García Lorca). David Conte contributes another winning cycle, A Whitman Triptych – plus a pair of appealing pieces: The Composer and Invocation and Dance.