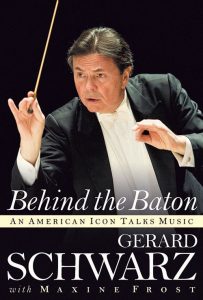 We at Delos are thrilled to announce that Maestro (and erstwhile trumpet virtuoso) Gerard Schwarz – one of the world’s most prominent, prolific, versatile and in-demand conductors – releases his new book today: Behind the Baton: An American Icon Talks Music. Published by Amadeus Press, the book offers a lively and totally unpretentious retrospective of his life and work, plus revealing and insightful commentary on the often misunderstood role of a conductor as well as a “Conductor’s Guide to the Orchestra.”

So then, how is Delos celebrating this long-awaited event? Let us count the ways:

“Jerry,” as we are privileged to call him, has long been one of Delos’s distinguished handful of most prolific and cherished recording artists. You may recall that Delos was one of the leading American pioneers in the development and refinement of all-digital recordings and the CD medium, which earned us our still-enviable reputation for superior, audiophile-quality recorded sound. And, with his The Classic Trumpet Concerti of Haydn/Hummel recording, made in 1979, Jerry was our very first digital recording artist.

You may well know that Jerry and his various orchestras recorded important works for Delos encompassing the Baroque idiom through cutting-edge contemporary music. These orchestras included the New York Chamber Symphony, the Los Angeles Chamber Orchestra, the Scottish Chamber Orchestra and the London Symphony Orchestra. He also was one of the mainstays supporting our seminal founding mission of providing a recording platform for both American artists and composers. He and his own long-term ensemble, the marvelous Seattle Symphony, filled a tremendous void in the global discography by recording groundbreaking surveys of music by such American masters as Aaron Copland, Roy Harris, Alan Hovhaness, Howard Hanson, David Diamond, Paul Creston and Walter Piston. Rather than overwhelm you with a lengthy list of his many distinguished recordings for us, we invite you to check out his extensive Delos discography (including theme compilations) HERE. 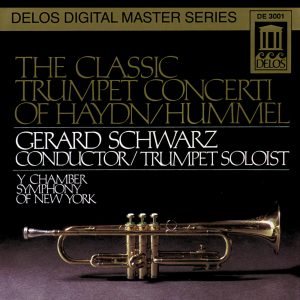 Also, to Delos fell the honor of documenting in glowing sound Jerry’s supremacy as a trumpet virtuoso; in fact, many music fans first knew him as such. To boot, we covered his period of evolution from trumpet wizard to master conductor. As any true trumpet aficionado will tell you, many of his classic recordings for the instrument remain among the most highly regarded anywhere, even decades after he made them.

For those of you who just can’t wait for your own copy to arrive, here, to whet your appetite, is the Maestro’s bio.