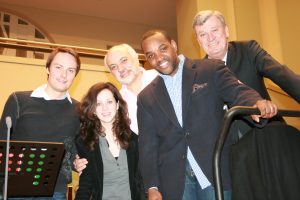 The great news came hard on the heels of last month’s announcement that the very same album (along with two other Delos releases) had been nominated for final consideration in Europe’s prestigious International Classical Music Awards (ICMA) competition. This stellar release is thus getting well-deserved attention on BOTH sides of the pond!

Given the flood of ecstatic rave reviews the CD has gotten since its release – many of which have been featured in these website pages – the Delos team’s hopes for a GRAMMY nomination were well and truly justified. It’ll be hard not to hold our collective breath until the upcoming awards telecast that’ll happen on Sunday, February 8, 2015!