“To write about the guitar as a single type of instrument is highly misleading; it implies a uniformity that never existed.” – Smaro Gregoriadou

Over the years, Delos has released many critically acclaimed guitar recordings. Each of these recordings has differed in some way that truly brings to light Smaro Gregoriadou’s opening quote in her album notes for “Reinventing Guitar”. From guitar quartets to solo guitar albums, to guitar with narration, to guitars in chamber music — no release is simply “a guitar” as most people think of the instrument.

The guitarist with the most albums on Delos is “The Remarkable Paul Galbraith (Click to read the 36-for-36 post on Paul Galbraith)“, who plays a unique 8-string guitar in all of his recordings. Guitarist Emanuele Segre‘s first Delos release “The Spanish Guitar” features music from the 16th-20th centuries on a modern instrument. His second release pairs him with Moni Ovadia as narrator in the release “Platero Y Yo (Platero and I)“. The Brazilian Guitar Quartet’s recent release “Brazilian Guitar Quartet Plays Villa-Lobos” features two 8-string guitars and two 6-string guitars.

However, the idea of diversity within the instrument is truly driven home by Smaro Gregoriadou’s album “reinventing guitar!“. In this recording, Gregoriadou uses three guitars created by inventor Yorgos Kerstopoulos: a triple-double-sing course guitar in re-entrant tuning, a single-stringed guitar in ordinary or low tunings with right-hand pedal, and a single-stringed high-tuned guitar with right-hand/movable back pedals and scalloped fingerboard. As Gregoriadou explains it, the “ Kertsopoulos Æsthetics consist of continuous retrospective research on the guitar’s history and traditions that belong in the vanguard of scientific, technological and artist advances in the world of classical guitar today It involves a series of pioneering achievements in the fields of guitar and string construction, aiming: (a)to connect the contemporary guitarist with the obsolete historical forms of guitar, and (b) to expand the modern guitar’s technical limits, offering potential solutions of its undesirable complexities, namely low volume, imbalance in the transmission from the 3rd to 4th string, dullness of trebles, and poor quality of tone.” 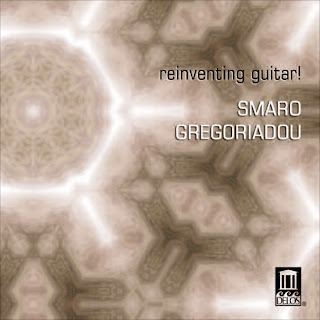 A “must-have” for guitar enthusiasts, Reinventing Guitar brings a rich array of novelties from young Greek guitar virtuoso and composer Smaro Gregoriadou. She plays music from the Baroque to the present on three guitars differing in type, number and material of strings, timbre and tunings, all built by Yorgos Kertsopoulos of Kertsopoulos Æsthetics. Kertsopoulos’ instruments blend exhaustive historical and aesthetic research with practical acoustic applications for current audiences.

Smaro’s beautiful performance of the Bach Lute Suite offers the first opportunity for Kertsopoulos’ unique triple-double-single course guitar to be heard worldwide. Her generous album notes, along with color photographs of the instruments she plays, provide an absorbing backdrop for the program. Her own Balkan Dances, based on folk themes and rhythms, are played on two different instruments, true to Balkan folk tradition.

Smaro’s interest and skill in blending old and new has led this intriguing young artist into classical theatre as well: she is a founder of the Echoes Theatre Company in Athens, whose first production, in 2007, was Sophocles’ Antigone in the original ancient Greek text.

“The Brazilian quartet is a unique musical group: it consists of two standard
guitars and two eight string guitars à la Paul Galbraith, who was for a
time a member of the group. What does it sound like? In a word it is magnificent.” – Soundboard Magazine

Praised by the Washington Post for their “seductive beauty” and “virtuosic gusto,” the Brazilian Guitar Quartet has established itself as one of world’s leading guitar ensembles. The group’s unique combination of regular six-string and extendedrange, eight-string guitars, allows for the exploration of an original and unusual repertoire. In more than a decade of activity, the BGQ has performed over 300 concerts in the Americas, Europe, Australia and Asia, often receiving ecstatic audience responses, garnering rave reviews, and meeting sold-out halls.

The Brazilian Guitar Quartet were “headliners” at the inaugural World Guitar Congress in Baltimore where they, together with the Baltimore Symphony Orchestra, gave the world premiere of a specially-commissioned concerto by Brazil’s 2001 “Composer of the Year,” Ronaldo Miranda. In 2006, the Quartet gave t
he Brazilian premiere of this work with the Petrobras Symphony Orchestra in Rio de Janeiro. In 2009, as a tribute to the 100th anniversary of Isaac Albéniz’ death, the BGQ presented the composer’s masterwork Suite Iberia on a concert tour in some of the most important capitals of Brazil. 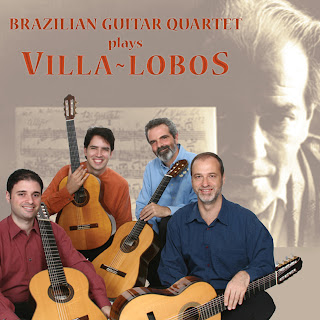 All arrangements by Tadeu do Amaral

In the album notes, Villa-Lobos authority Gil Jardim points out that “exuberance and simplicity” are hallmarks, both of Villa-Lobos’ music itself, and of this beautiful collection of arrangements for guitar quartet. “I am amazed by the superb quality of the Brazilian Guitar Quartet… This recording is an authentic reflection of the Villa-Lobos way of making music… [and] provides the opportunity to enjoy the way in which the guitar’s multiple timbres sensitively reveal every nuance of musical experience.”

The Brazilian Guitar Quartet has produced a number of favorites in the Delos catalog. Earlier Delos BGQ albums have been universally acclaimed (Classical “Critics Choice,” Billboard’s “Best of the Year,” Audiophile Audition). Two of the albums, “Essencia do Brasil” and “Encantamento,” offer a range of Brazilian music. The third presents the BGQ’s splendid arrangement of the Bach Four Suites for Orchestra. The most recent album, Albeniz “Iberia,” was hailed as “historic” in Brazil. Allmusic called it “as warm and transcendentally evocative as Albeniz could have wished for.”