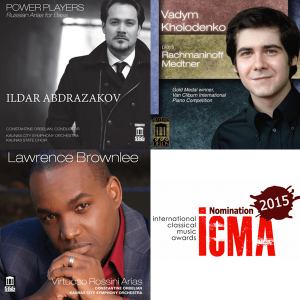 First-round nominations for the 2015 International Classical Music Awards (ICMA) were announced on November 19th, and THREE recent Delos CD releases were selected for final consideration! The ICMA – having taken the place of the Cannes Classical Awards (later known as MIDEM) – first awarded prizes in 2011, and has since taken its place as the leading pan-European competition for excellence in classical recording. Its jury of 16 distinguished classical critics and broadcasters represents countries from Turkey to Russia, including most European nations in between.

Final winners will be announced on January 20, 2015, with the awards ceremony and gala concert to follow in Ankara, Turkey, on March 28. We call on all Delos fans to wish us luck … and keep your fingers crossed!