Digital Release: Dancing on the Head of a Pin 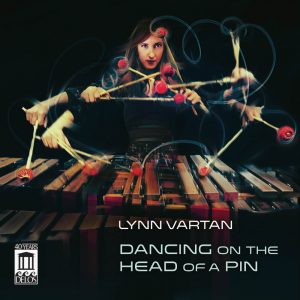 Now Available for digital streaming and download: Dancing on the Head of a Pin

“Vartan proved herself to be a commander of color … She was the model of a musical action painter.” —Los Angeles Times

It is only in past couple of decades that the marimba – long primarily an ensemble instrument – has emerged as a vehicle for solo concert performance as well, attracting the attention of increasing numbers of classical composers. Among the gifted percussionists who have gravitated to solo marimba performance, Lynn Vartan has emerged as one of the instrument’s most brilliant and engaging virtuosos.

In this recording – Vartan’s debut album for Delos – she treats us to a fascinating program of works written since the turn of the 21st-­century by both established composers and promising newcomers. An intriguing array of pieces for marimba alone comes courtesy of Guillaume Le Picard, Gareth Farr, Anna Ignatowicz, Daniel Berg, and Csaba Zoltán Marján. In the course of the two final works – by Dave Maric and Christos Hatzis – Lynn displays her versatility by playing not only marimba, but also vibraphone and crotales (small, bell-­like cymbals). These varied instruments – plus prerecorded sampling of other instrumental and/or vocal sounds – make for impressive and beguiling sonic tapestries in both works.