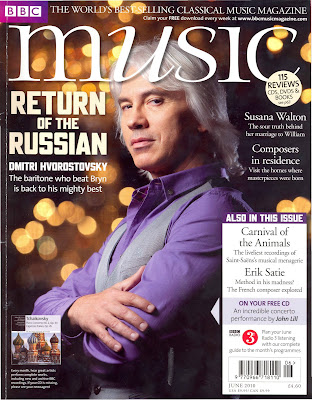 If you are a subscriber to BBC Music Magazine, this might be old news, but you’ll admit it’s still exciting news! Not only was Dmitri Hvorostovsky featured in the magazine, he was on the cover! The article was fantastic and gave great insight into how he became a star as well as what he is doing currently. We strongly encourage you to pick up the June 2010 edition of BBC Music Magazine at your closest magazine rack!

There was also some great information about the upcoming Pushkin Romances release which will be out next week!

“Delos will release a successor to his acclaimed set of Tchaikovsky songs, a recital of romances by Russian composers from Glinka (1804-1857) to Sviridov (1915-1998) setting the words of the great Russian poet, Alexander Pushkin. And it’s Pushkin that begins our conversation when we meet in London. ‘For Russians, Pushkin is like Shakespeare to the English-speaking people, Heine or Goethe to Germans,’ he explains. ‘At school every child is obliged to read Pushkin — his novels, his tragedies. his prose-writing is considered as important as his poetry.'”

They also go on to list some of the operas inspired by Pushkin’s writing: Mussorgsky’s Boris Godunov, Tchaikovsky’s Eugene Onegin and Queen of Spades, Rimsky-Korsakov’s Mozart and Salieri, Rachmaninov’s Aleko, and many more! There is also a wonderful subset article all about Pushkin, his history, and the operas that have given him musical legacy.