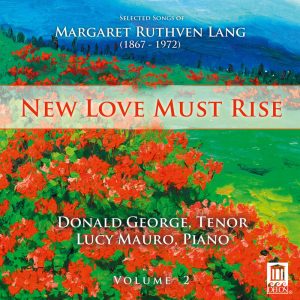 Listen to the segment on North Country Public Radio.

With “New Love Must Rise,” Delos’ second volume of delightful art songs by Margaret Ruthven Lang, we seek to re-establish this worthy Boston composer’s long-forgotten reputation as the most significant American woman composer of her day. Historically important as the first American female composer to have her music performed by leading American orchestras, she never published (and later destroyed) those works, and stopped composing altogether in mid-life. But her published works – primarily her body of 130 art songs – reveal the rare skill and striking appeal of her art.

Her songs’ exceptional melodic invention and beauty, coupled with imaginative and sophisticated piano support, are superbly realized by tenor Donald George and pianist Lucy Mauro – who are on an ardent personal mission to revive interest in her music and restore Lang to her rightful niche in the Pantheon of American musical history. With these two volumes of songs now on CD (future recordings of her choral and piano compositions are planned), the musical public can begin to hear for themselves why Lang’s wonderful music is ripe for rediscovery.

Download all of the Volume 1 and 2 materials originally included in Volume 1!

Buy New Love Must Rise direct from Delos and Save!