Emanuel Gruber in Concert This Sunday 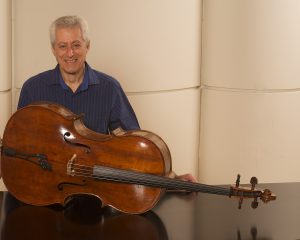 Sunday February 21, Emanuel Gruber presents a concert of J.S. Bach’s Cello Suites at Hayes Barton United Methodist Church in Raleigh. The concert is a repeat of a performance he gave at Duke University on January 31st. Read the Classical Voice of North Carolina review of that concert:

“There was a surprisingly large turnout in the Ernest Nelson Music Room, on the East campus of Duke University, for an afternoon recital of three of the six Suites for Cello by Johann Sebastian Bach (1685-1750). Under the auspices of the Department of Music, the concert’s guest artist was the distinguished cellist Emanuel Gruber. … Gruber’s program was an excellent selection, Suite No. I in G, S.1007, coupled with my two favorites, Suite No. III in C, S. 1009, and Suite No. V in C minor, S. 1011. … Gruber opened the program with a glowing performance of the First Suite. His choices of tempos and his phasing were well within current approaches. His tone was rich and full and his intonation was good, as was his articulation. … I particularly liked his treatment of the Allemande and Courante. His playing of the severe and formal Sarabande was masterful. The Third Suite brought the concert to a rousing end with its exuberant, soaring movements given their due. His treatment of the second Bourrée pleased me greatly.” —William Thomas Walker, CVNC 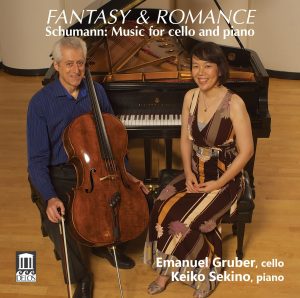 In this, Emanuel Gruber’s second album for Delos, we hear – in addition to the Op. 102 pieces above – cello versions of the Fantasy Pieces, Op. 73; Adagio and Allegro, Op. 70; Three Romances, Op. 94; Evening Song, Op. 85; and Dreaming, Op. 15. All of these marvelous works re ect Schumann’s wondrous lyricism and heartfelt passion; also his hallmark spontaneity and dizzying mood swings.
Buy Now on Delos