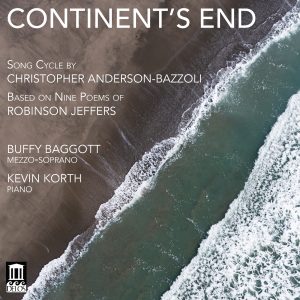 “Christopher Anderson-Bazzoli’s response to the texts is visceral; the sheer drama of the opening song, “Granite and Cypress,” with its tumultuous piano opening below the imperious voice (“White-maned, wide-throated, the heavy-shouldered children of the wind leap at the sea-cliff”). Mezzo and fellow Californian Buffy Baggott has the perfect voice. Her lower register implies Earth Mother, her higher register is taut, powerful and gripping; but most important, both she and pianist Kevin Korth are completely embroiled in the emotionally wide- ranging setting. Anderson-Bazzioli is incredibly sensitive to the ebb and flow of the text, his music impeccably respectful of the poet and yet at the same time entirely individual of utterance. In total contrast comes “Natural Music,” still and calm, with the piano’s baritone-range melody in perfect counterpoint to Baggott’s line. It is a plea to listen through the noise of division and to return us to an original state in which we appreciate the sounds of Nature Herself, to re-find those voices, “clean as a child’s.”

Baggott’s voice is notable for its strength, yet at higher dynamic levels or moments of emotional power she keeps only a modicum of vibrato, something that enables each word to come through; the exactitude of both her delivery and Korth’s playing in “October Evening” enables a precise realization. Speaking of star-gazing as the seasons turn, this brief song makes a stirring impact; “Continent’s End” (set at an equinox and from which the disc takes its title) finds Korth in fine form: His staccato attacks bejewel Anderson- Bazzoli’s piano writing, as Baggott’s voice blossoms gloriously.…

This is a superlative setting by a composer whose music deserves the greatest circulation. The recording is fabulous; present, detailed, clear. But most importantly, this music will move all but the most stone-hearted; of that there is no doubt. ”