Featured Albums of the Week Worth Chanting About!

We’ve got two new Featured Albums of the Week this week, and these are certainly deals worth “chanting” about! We’re offering two must-have recordings of Dennis Keene conducting the Voices of Ascension in Beyond Chant: Mysteries of the Renaissance and Voices of Ascension: From Chant to Renaissance for ONLY $5.98 each!!! And don’t forget about FREE SHIPPING during our Super Shipping Summer Savings Sale! 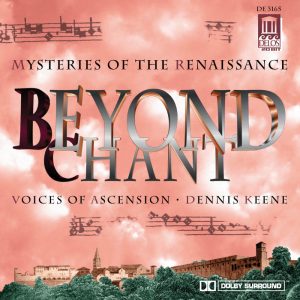 Beyond Chant: Mysteries of the Renaissance

“O Magnum Mysterium” (Oh Great Mystery) begins one of the masterpieces heard on this album, spelling out the spiritual inspiration behind all sacred Renaissance music. “I think that as our modern lives get more and more noisy and cluttered we yearn for a more peaceful and transcendent world. Perhaps that explains the recent interest in the antique music of the church: the music heard in the old basilicas, cathedrals and monasteries of Europe. ‘This particular recording came into being because of the remarkable reaction to the two Renaissance works on our first CD, ‘Mysteries Beyond’ (formerly ‘Ave Maria’). Many of our listeners said ‘let’s have a whole album of Renaissance music'” — Dennis Keene, from the booklet notes 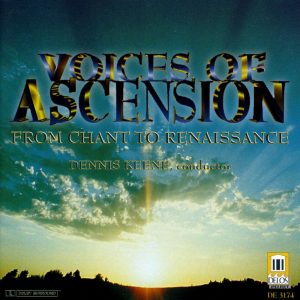 From Chant to Renaissance

A follow-up to the best-selling “Beyond Chant,” (DE 3165) this program of visionary music takes the listener on an other-worldly journey from Chant to Renaissance. Beginning with a mesmerizing solo soprano chant of Hildegard von Bingen, this new program weaves both solo and group chants through medieval and Renaissance masterpieces. The flow back and forth enables the listener to feel the spellbinding continuity in all of this music, which has its strong roots in Chant. Dennis Keene and the Voices of Ascension were one of last year’s success stories with their release of “Beyond Chant.” Not only did the album make headlines, it was included in a number of best sellers lists including Billboard’s classical chart. (Debuting at #10)