We’ve recently been releasing the Shostakovich Film Series, but it’s not the first time Delos has a long history of Film Music albums! We were excited to see that Film Music: The Neglected Art‘s “Delos Recording of the Month” for January was another great film music release — Korngold: Symphony in F-Sharp, Op. 40/The Sea Hawk! 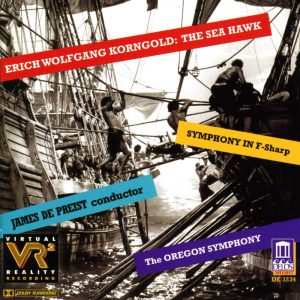 “Of the many film composers who also wrote classical music Korngold certainly is close to the top of the list along with Vaughan Williams, Miklos Rozsa, and Dimitri Shostakovich. These composers seem to have been at home with either the silver screen or the concert hall. This was especially true of Korngold who saw fit to borrow his film material and use it in his classical material or the other way around. Having recently completed a review of Battle of Neverta (1969), I found that Bernard Herrmann did the very same thing using a section of his symphony and part of his clarinet quintet.

“While there are now several recordings available of this fine work (Symphony in F-Sharp, Op. 40) you’ll find none better than James DePriest and the Oregon Symphony. The digital recording is crystal clear with excellent ambience. As a bonus you also get Sea Hawk…” — Thomas Kiefner, Film Music: The Neglected Art

Read the full review and feature on Film Music: The Neglected Art!

Purchase this recording direct from Delos!