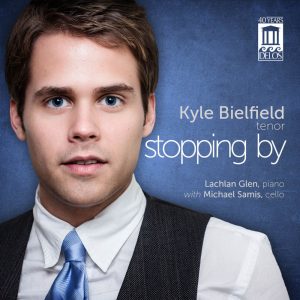 French magazine, ForumOpera, has a new review for Kyle Bielfield’s stopping by release:

“Putting together a first recital is an art, especially for young singers who are not yet associated with a particular work or a specific musical genre (the choice is easier for countertenors, who are practically consigned to the Baroque). At the point in his career when an artist does not necessarily have a confirmed stylistic identity, why compete with the biggest singers, re-recording for the umpteenth time the most hackneyed repertoire of tunes? If you want to get noticed, it’s so much better to build a different type of program, especially in an area where you can enjoy some advantages. So, for English speakers, it is undoubtedly more reasonable to sing in one’s own family tree.

The tenor Kyle Bielfield perfectly understood this in offering a dazzling journey into the world of American melody, where almost everything remains to be discovered by the French music-lover. Despite the efforts of a Dawn Upshaw or a Susan Graham, and even if the most knowledgeable of our compatriots have gone beyond Bernstein and Barber to venture into Elliott Carter and Ned Rorem, who in France knows Beach, Cadman, Dougherty, and others that make up the program of this disc? Alongside so many pieces never heard on this side of the Atlantic, “Beautiful Dreamer,” by Stephen Foster (1826-1864), would come off as a hit tune.

Fresh from the Juilliard School, Kyle Bielfield has already sung extensively in the United States, but has yet, I believe, never performed in Europe. His soft and very high voice seems natural for singing Britten, with accents sometimes almost too smooth: be careful not to sing too sweetly … At any rate, there is nothing too bold or too salty in this menu, and one can only recognize the skill with which he connects the harmonic daring of Ned Rorem (“Snake”) to the Victorian comfort of Charles Wakefield Cadman (“Sky Blue Water”), the head-voice notes with which he crowns several tunes, or the elegance of his partners, the Australian pianist Lachlan Glen and cellist Michael Samis.

Kyle Bielfield even permits himself the luxury of interpreting three melodies by three composers inspired by the same Robert Frost poem, “Stopping by Woods on a Snowy Evening,” which gives the logical title to the recital. The composers are Samuel Barber (1910-1981), John Duke (1899-1984) and Ned Rorem (born in 1923, the year Frost published his poem). The great American poet is also represented by Elliott Carter’s “The Rose Family.” If Barber needs only two minutes to paint a nice postcard, John Duke gives himself three and a half minutes and takes the time to establish a more enchanting atmosphere; as for Rorem, his winter landscape has the austerity of an Erik Satie. The end of the disc goes slumming delightfully into the realm of the musical side with Irving Berlin Carefree (1938), an excerpt from Peter Pan (1950) and another tune from an unfinished musical by Leonard Bernstein himself.”—Laurent Bury, ForumOpera (translation by Dennis Adams)

Read the review in the original language at ForumOpera.com