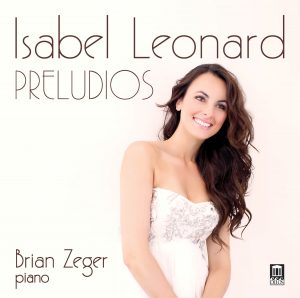 Such glowing praise is entirely typical of the critical response to soprano Isabel Leonard’s work, whether in opera or the concert stage. Her luxuriant vocal tone, riveting stage presence and remarkable artistic versatility make her one of today’s most in-demand sopranos. In this – her first release on Delos – she explores the riches of Spanish song, in all its varied Iberian forms and styles that can be traced back as far as its millennium-old Moorish influences. The generous program encompasses pure folksongs, folk-influenced art songs, dances and popular theater songs by quite a few of Spain’s finest composers of the late-19th and 20th-centuries: Mompou, Falla, García Lorca, Sanjuán, Granados and Montsalvatge.

Leonard – herself a Spanish speaker and passionate devotee of Iberian musical art – is partnered here by Brian Zeger: one of America’s most supremely sensitive and accomplished piano collaborators. Together, with this intriguing album, they promise their fortunate listeners an unforgettable tour through one of the most beautiful, beguiling and diverse of all the world’s vocal traditions. 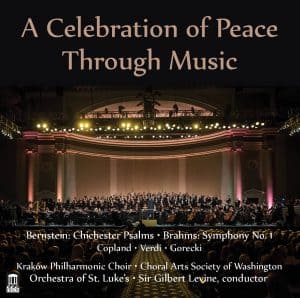 Delos – a long-standing champion of great music’s therapeutic and healing powers – is delighted to release this remarkable musical celebration of peace.

Distinguished conductor Sir Gilbert Levine’s career is particularly notable for his many concerts with major orchestras that have been widely broadcast on PBS. This Jewish musician’s activities have largely focused upon interfaith concerts of spiritually potent music celebrating universal human themes and values.

The performances preserved here – recorded in concert at Washington DC’s DAR Constitution Hall – celebrate the canonization of two recent Popes: John XXIII and John Paul II. This “Pope’s Maestro” became a friend of the latter “Polish Pope,” which led to a series of similar events at the Vatican and elsewhere. The reigning Pope Francis is also honored.

The peace-themed program includes well-known music by Copland, Verdi, Górecki, Bernstein and Brahms. Meticulously recorded and filmed for repeated major-metro domestic PBS broadcasts (also in Europe) through 2017, these masterpieces are heard in glowing renditions by the vaunted Orchestra of St. Luke’s plus the two fine choirs of the Krakow Philharmonic and the Choral Arts Society of Washington.

Violinist Piet Koornhof, one of South Africa’s most acclaimed musicians, has figured prominently in three prior recordings for Delos. In this release – beautifully partnered by distinguished pianist Truida van der Walt – he has assembled a program of mostly 20th-century works that focus more on his instrument’s lyrical, “singing” qualities than its virtuosic possibilities.

Captured in radiant sound, these sweet and soulfully attuned performances by Koornhof and van der Walt make for an exceptional album that will beguile any fan of music for violin and piano. 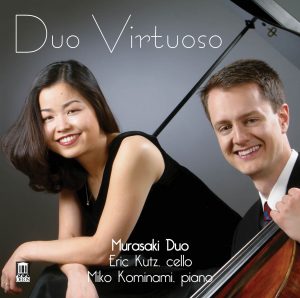 Praised by the New York Concert Review as having “an easy virtuosity” and demonstrating “an unusually high level of ensemble playing” in their recent Carnegie Hall appearance, Duo Virtuoso has been enchanting audiences with their stylish and vivacious playing ever since its founding in 1996.

This most accomplished duo – consisting of cellist Eric Kutz and Miko Kominami – serves as Ensemble-in Residence at Iowa’s Luther College, where both are professors. Here they offer this varied and delightfully appealing program, including lighthearted bonbons like Mario Castelnuovo-Tedesco’s tongue-in-cheek “Figaro” from Rossini’s Barber of Seville and Bohuslav Martinu’s ingenious and engaging Variations on a Theme from Rossini’s Moses. Earthy Latin flavors abound, thanks to Alberto Ginastera’s rhapsodic Pampeana No. 2 and Astor Piazzolla’s sensual Le Grand Tango. Finally, there’s Johannes Brahms’ timeless masterpiece: the darkly ruminative and complex Cello Sonata No. 1 in E minor.

Captured in rich and pristine sound, these wonderful performances will enchant any lover of chamber music: particularly those partial to music for cello and piano.