Gleb Ivanov Sees The Piano As A Vocal Instrument 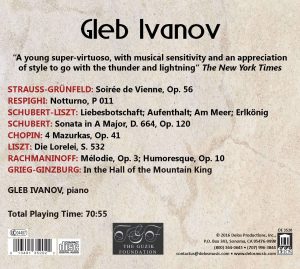 Russian pianist Gleb Ivanov is deeply sensitive to his musical ancestry. It informs every aspect of his playing, from his choice of repertoire to his stage presence. Indeed, his noble bearing and posture recall musicians such as György Cziffra (who barely moved even during the most physically exacting passages) or Vladimir Horowitz (whose expression when playing was nearly blank except for his exceedingly expressive eyebrows). Ivanov’s technical prowess is no less than theirs; he has the ability to play highly challenging music so effortlessly that we may forget its pianistic difficulty and revel in its musical virtues.

Ivanov’s fascination with the great pianists of the twentieth century reveals a dedication to the tradition of piano virtuosity. It is not enough for Ivanov to play a brilliant virtuoso piece, for that is not what he feels made Rachmaninoff a great pianist, nor Horowitz. That last stretch of greatness comes from an electricity that only stems from a deep connection to the emotional triggers great technique can unlock. Ivanov listens to recordings obsessively. More interestingly, it is rarely the work that fascinates him, as much as the performer. His CD shelves are crammed with hundreds of recordings by Glenn Gould, Horowitz, Rachmaninoff, William Kapell, György Cziffra, and others (among them Jascha Heifetz, Maria Callas, and Paco di Lucia). There are few recordings of living performers.

To Ivanov, the piano is a vocal instrument. Even when playing the works of Prokofiev – a composer-pianist who believed the piano to be a true percussion instrument – Ivanov seeks to produce a human voice. His earliest performances were accompanying his father, the baritone Vladimir Ivanov, and the sound of opera permeated his childhood. It reached his sister, harpist Varvara Ivanova, and brother, cellist Danila Ivanov, and his mother, harpist Zoya Slootskovskaya. When Gleb and his siblings weren’t at their instruments, they were usually listening to recordings of nineteenth-century Italian opera, music resplendent with broad, soaring vocalism. Therefore, for Ivanov to have chosen a program redolent with vocal music transcribed by some of history’s finest pianists seems natural. 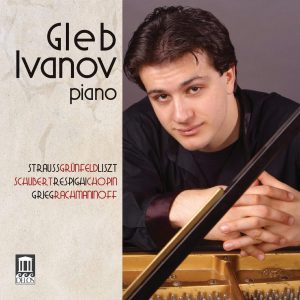 “Eerily like the ghost of Horowitz, Mr. Ivanov engulfed the keyboard, rattling the rafters and thrilling the audience.” —The Washington Times

Gleb Ivanov remains utterly true to the legendary traditions of the Russian school of piano playing, while deriving both inspiration and virtuosic example from the world’s greatest technical masters of the keyboard: legendary artists like Horowitz, Rachmaninoff, Gilels and others.