The Glory of Russia – Coming to your TV soon! 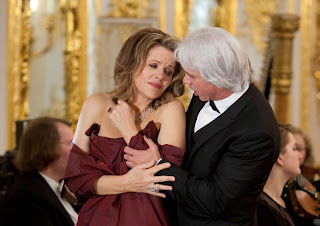 Back in April we told you about Constantine Orbelian’s film “The Glory of Russia: Sights and Sounds from St. Petersburg” being premiered at the Newport Beach Festival. Well, now the film is coming to your television set! PBS in their “Great Performances” series is airing the program on September 1st! You’ll have to check your TV guide for the time it will air in your area, but make sure you do and make an event out of it, or at least set your DVRs! The DVD is already available for pre-order on Amazon.com. The name of the program and DVD has been changed to “Renée Fleming & Dmitri Hvorstovsky: A Musical Odyssey in St. Petersburg” so make sure that is the title you’re looking for.

In this new special from PBS’s Great Performances, Dmitri welcomes his friend and colleague, the American soprano Renée Fleming, to Russia, where the two perform great opera scenes in magnificent palaces in St. Peterburg. There in the “Venice of the North,” they explore and perform in some of the most spectacular locations of a city that was born in the remarkable mind and imagination of the young Czar Peter the Great (a city that he named not for himself, but for Saint Peter). St. Petersburg is a city of palaces, and Fleming and Hvorostovsky take in three of the most memorable, all of them on the water. First is the Winter Palace, also known as the Hermitage, built with one entire facade facing the Neva River. Next on the tour is the Yusupov Palace (the scene of Rasputin’s murder); and lastly, the Peterhof with its fantastic fountains on the Gulf of Finland. In the program, Dmitri and Renée delight audiences with beloved arias and duets from Verdi’s Simon Boccanegra and Il Trovatore and Tchaikovsky’s Eugene Onegin, Queen of Spades and The Oprichnik. In addition to the performances, the two opera stars take viewers on a tour of St. Petersburg’s extensive canal system, revealing the city’s many scenic wonders.

It will surely be worth your time, so make sure to tune in or set your DVRs to PBS on September 1st for Renée Fleming & Dmitri Hvorstovsky: A Musical Odyssey in St. Petersburg.