The Glory of Russia: Sights and Sounds From St. Petersburg 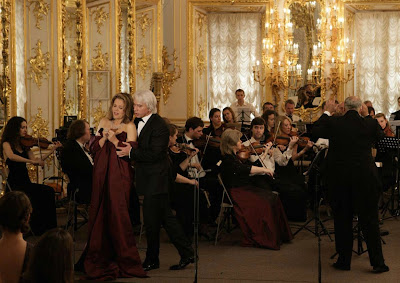 THE GLORY OF RUSSIA: SIGHTS AND SOUNDS FROM ST. PETERSBURG

In St. Petersburg, the former capital of the Russian Empire, Renee Fleming, America’s Queen of Opera, performs in the palaces of the Czars with internationally acclaimed Russian baritone Dmitri Hvorostovsky, resulting in a fascinating blend of history, art, and culture against a stunning backdrop.

We are happy to offer you a most spectacular program featuring two world opera stars — Renee Fleming and Dmitri Hvorostovsky, who will be leading us along the marvelous palaces and historic sights of St. Petersburg and Peterhof.

They will be accompanied by Constantine Orbelian and the State Hermitage Orchestra. In this musical trip they will perform operatic duets and arias by Verdi, Tchaikovsky, Thomas, and Bellini, as well as romance by Tchaikovsky and Rachmaninoff — a real musical feast for the eyes as well as ears.

The director is Brian Large, one of the best and foremost Opera TV and Film directors in the world. The European production partners are the renowned Opera filming company Moving Images GmbH and their President Bernard Fleischer of Salzburg Austria. Co-producer from the Russian side is the famous Gorky Film Studio. Script writer is Kathrin Ames — most recently she was head of the Cultural and Arts section at NEWSWEEK magazine.