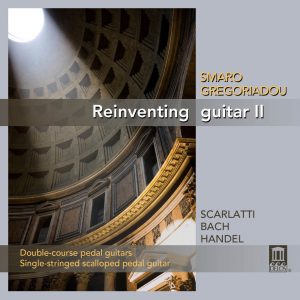 Greek guitar virtuoso (and composer) Smaro Gregoriadou is not only a peerless performer; she is also on an ongoing crusade to explore the historical roots of her instrument and ancient performance practices, and apply her findings to modern guitar artistry. Her extensive research has revealed many long-lost instrument designs, string configurations and tuning schemes, which – with the collaboration of luthier Yorgos Kertsopoulos – has led to the crafting of modern replicas of very different sorts of instruments that have not been heard for centuries. Her recently released Reinventing Guitar II (DE 3419) is the second in a series of albums on Delos that demonstrate how Baroque-era music (by Bach, Handel and Scarlatti) sounds on such replicas, revealing a wealth of new sonic and interpretive possibilities for modern players.

Mr. Brad Conroy of GuitarInternational.com, realizing the importance of Smaro’s revolutionary work, has just posted a rave review of the album. After stating that, “Gregoriadou delivers a very polished performance that is perhaps some of the most authentic sounding interpretations ever recorded on the guitar,” he goes on to describe the remarkably different effects that she achieves on instruments constructed with such historical features as “double course” string configurations and “scalloped” fret boards. He concludes his glowing review with “Reinventing Guitar II is a tremendous achievement that contains perhaps some of the most convincing guitar interpretations of Scarlatti, Bach, and Handel. Gregoriadou is a virtuoso guitarist, scholar, and she is a stand out who will no doubt excite audiences, while carving out her own niche within the classical guitar world.”

Check out the full review, right HERE. If you’re a classical guitar artist or fan who keeps up with the cutting-edge state of your art, you owe it to yourself to get to know Smaro and her fascinating work. Performers will particularly appreciate her exhaustive liner notes that address a multitude of historical factors and technical details. While you’re at it, check out her first Delos recording, Reinventing Guitar (DE 3398): her critically acclaimed 2009 album that first focused international attention on the work of this vital and very important artist.

Don’t forget that Delos has been “instrumental” in seeking out and bringing you pioneering new approaches to guitar playing; witness our groundbreaking series of best-selling albums from Guitar wizard Paul Galbraith (with whom Smaro has studied) and his vertically played eight-string guitar. Thanks to Smaro, Delos is now back on that track!

Purchase Direct from Delos and Save!

Listen to Volume 1 on Spotify, and purchase direct from Delos!