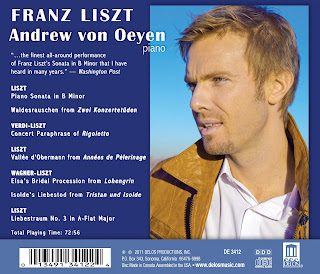 Choosing repertoire is often difficult for me.  One of the reasons is that the piano literature is so large and the choices can be overwhelming. It’s hard enough to decide what to perform in concert; it’s even harder deciding what to record. Add to the equation “debut album” and, well, that really complicates things! Incidentally, in the season preceding this recording project, I had performed the Liszt B minor Piano Sonata many times all over the world.  It was a work I had really lived with and one I had planned to record eventually (interestingly, this work seems to appear on a number of pianists’ debut albums), so I decided to take the plunge, and the Sonata became the anchor around which the rest of the program was built.

If there is a theme to the album it could be interpreted in several ways.  On one hand, the program encompasses a wide range of different musical styles, forms, and genres found in Liszt’s piano music — the sonata (albeit in a groundbreaking form), etude, transcription, the Lied, the poetic ballade — thereby offering a “survey” of his incredibly diverse compositional output. It shows his multifaceted abilities as a composer and his eclectic tastes in musical style.  On the other hand, the program finds a kind of unity in its Germanic nature, as nearly all the works (with the big exception of the “Rigoletto Paraphrase”) strongly reflect the influence of the Austro-Germanic tradition and, especially, Richard Wagner.

I included the three transcriptions mostly out of my love of Wagner’s and Verdi’s operas.  To me, Lohengrin and Tristan und Isolde are among the most powerful and beautiful pieces in the repertoire and touch me deeply.  As for the wild card on the album, the “Rigoletto Paraphrase:” I just couldn’t resist including this wonderful “dessert piece” that represents some of the best of Liszt’s virtuoso writing.

Finally, it was always in the back of my head that this CD coincide with the bicentennial year of Liszt’s birth, 2011.  As such, I am pleased and honored to have this album released by Delos in this special year.