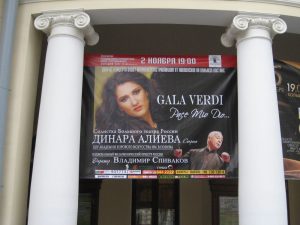 Due to some mysterious celestial alignments in early November, I briefly found myself in Moscow at the same time as Delos’ two most significant figures, label director and pianist Carol Rosenberger and  Constantine Orbelian, the San Francisco-born symphony and opera conductor who has been Delos’ pre-eminent talent scout in Eastern Europe for two decades.

The Russian capital is a place where the weight of history hangs as heavily as the gray skies that hover over the city at this time of year. Such iconic spots as Red Square, St. Basil’s Cathedral, the Kremlin and Lenin’s Tomb are concentrated in close proximity. I could only be awestruck by my first glimpse of these buildings, with their strong echoes of the 20th century newsreels that traced the events of the October Revolution, the Bolsheviks’ moving of the national capital from Petrograd to Moscow, the years of Stalinist terror, the unimaginable bloodletting of World War II, the Soviet military buildup during the chilliest years of the Cold War, the waving of the party leadership during ceremonial parades and, finally, the collapse of the Communist empire. Red Square is public space on a vast scale, commensurate with Russia’s own immensity (the country has nine time zones). Tellingly, Lenin’s Tomb – once one of the area’s most powerful attractions – is now open only three days a week, a local policeman informed us.

Near the entrance to the square is a remarkable bronze statue of Marshal Georgy Zhukov, the Red Army’s greatest commander in the winning of the Great Patriotic War against the Nazis. Zhukov is mounted on a horse that prances on a red granite base weighing 100 tons. The tribute to Zhukov was not unveiled until 1995, 21 years after his death. The heroic depiction, of course, does not suggest the turbulence Zhukov experienced in the postwar years, when he was stripped of his leadership posts, exiled to faraway locales, accused of collecting war booty, targeted for elimination by Kremlin hatchet man Lavrenti Beria and finally had the satisfaction of helping orchestrate Beria’s arrest and execution following Stalin’s death in 1953.

Russia has experienced an oil-fueled economic boom in recent years, and downtown Moscow is a magnet for the nouveau riche tier of society, making it one of the world’s most expensive cities. Smartly dressed women, lavish restaurants, hotels and nightclubs, outposts of every chic clothing brand known to man can be found here – along with some of the world’s most dire traffic conditions. Public parking lots are few and far between, and maestro Orbelian added that the meters on the street run a jaw-dropping 24 hours a day. A certain kinetic energy in the air suggests that Russia’s citizens are growing more confident that their nation is destined to reassume a leading global role in the evolving zeitgeist of the 21st century.

Russia has always greatly valued culture, and it did not disappoint on this visit. The Delos contingent was lucky enough to attend a wonderful concert by an artist whose debut recording for the label will be released in January.

She is Dinara Alieva, a soprano from Azerbaijan poised to make her impact on the world’s operatic scene. Alieva’s performance, with Vladimir Spivakov leading the National Philharmonic of Russia, was a benefit for the thousands of victims of September’s extensive flooding in the Amur River region of Russia’s Far East. The packed concert took place in a venue that has been the site of dozens of Delos recordings (many of them conducted by Orbelian) – the Great Hall of the Moscow Conservatory.

Alieva, a strikingly beautiful young woman from Baku, has already sung extensively at the Bolshoi Theater, the Mikhailovsky Theatre in St. Petersburg, the Vienna Staatsoper, Stuttgart Opera, Frankfurt’s Alter Opera and the Latvian National Opera. She is not yet well-known in America, but I expect that will change soon. Alieva is not only on the lofty technical level demanded of world-class opera singers; she produces a gorgeous timbre that is even throughout her range and manages to be penetrating while never piercing.

But the quality that appears to set her apart from much of the competition is her projection of emotional vulnerability in a highly natural way. This renders the mostly 19th century characters she musically portrays more believable than they often appear to modern audiences. And once Alieva’s work becomes more familiar to opera presenters, they are likely to regard her gifts as something very special. She has already been singled out for high praise by such towering figures as Montserrat Caballe, Teresa Berganza, Placido Domingo and Jose Cura.

On this night, the program was all-Verdi, and Alieva excelled in such arias as “Ritorna vincitor” from Aida, “Tacea la notte placida” and “D’amor sulli’ ali rosee” from Il Trovatore, “Addio del passato” from La Traviata and “Pace, pace mio Dio” from La Forza del Destino. As is the Russian concertgoing tradition, the lavish flower bouquets came to the stage early and often. She richly deserved them.

Alieva’s upcoming Delos release Pace mio Dio … (DE 3462) features material not only by Verdi but Puccini, Catalani, Cilea and Leoncavallo as well. The record was conducted by Marcello Rota, leading the Czech National Orchestra. It’s a strong effort that reinvigorates traditional repertoire and hopefully will open many doors for Alieva.

In a follow-up blog post on Moscow, I’ll describe the amazing Tretyakov State Gallery and the one-year-old Jewish Museum and Tolerance Center, both of which are practically worth a trip  all by themselves. 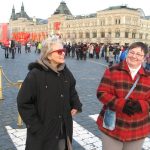 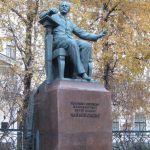 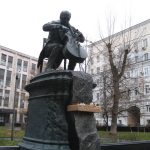 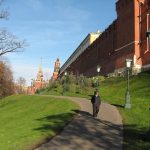