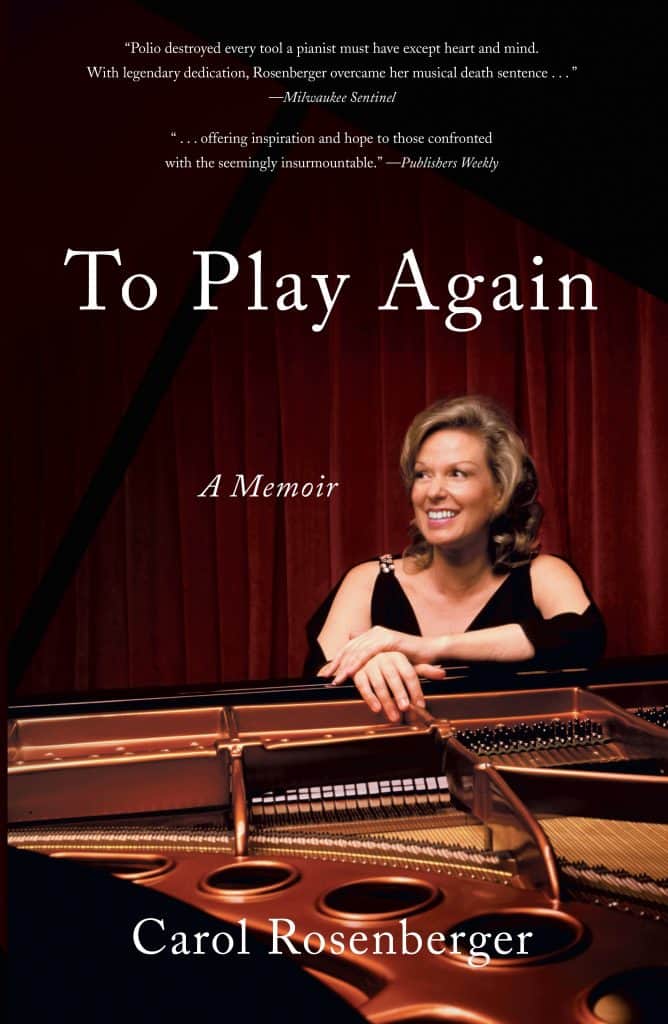 In To Play Again: A Memoir of Musical Survival, Carol Rosenberger shares the story of her remarkable life from her days as a young pianist, ready to embark on a concert career but unexpectedly struck by a debilitating attack of polio, to her ultimate recovery and return to the stage. Rosenberger was studying with famed teacher Nadia Boulanger in France, preparing for an upcoming competition, when she contracted polio, the dreaded contagious disease with no cure even today (the vaccine was developed in the late 1950s). In its worst yet rare forms, polio causes a range of paralysis and loss of muscle coordination. Rosenberger quickly went from practicing “eight hours a day of concentrated but exhilarating work” to barely being able to depress a key on an upright piano and “only with the greatest of effort.”

Her 10-year recovery and return to performing is a fascinating story of determination and courage filled with candid and heartfelt writing. In many ways, it’s a story of profound friendships – from the students who helped her to leave the hospital and recuperate back at Fontainebleau where she was studying, to the teachers, managers and so many others around the world, including Amelia Haygood, the founder of Delos, who helped Rosenberger find a path to performing and sharing music that was hardly imaginable in the throes of the illness.

Carol Rosenberger writes this inspiring memoir the same way she plays the piano: with elegance, heart, intellect and artistry. She provides rare insights into the professional pianist’s world, music study and performance, all explained in a way that is understandable for everyone. Indeed, the discipline and determination she developed as a student pianist no doubt helped her in part to overcome the enormous challenges she faced. Throughout the book, which is a page-turner, professional musicians will recognize and find support in many of their own struggles and achievements.

To Play Again is a must-read for everyone, particularly in a time when giving up on life’s challenges can seem all too common and easy. Rosenberger writes, “Lately I’ve been playing through Beethoven’s glorious Sonata, Opus 110, almost daily. This timeless masterpiece weaves beauty, joy, sorrow, acceptance, and finally redemptive triumph through its twenty-minute journey and never fails to thrill and inspire.” Those same words could describe To Play Again. Amelia Haygood, upon founding Delos over 40 years ago said, “the world needs the balm of music.” It seems fair to say she would likely say today the world needs the inspirational story of To Play Again. Read the book; listen to Carol Rosenberger’s exceptional recordings and be moved by an extraordinary life and musician.