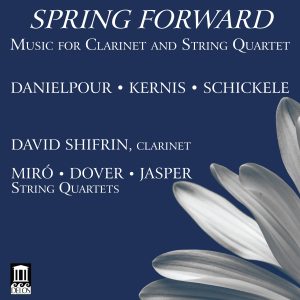 “David Shifrin’s deeply felt and strong commitment to the new clarinet literature as well as more-classical clarinet works leads him again and again to unearth some gems of modern composition. … Peter Schickele’s Spring Forward (2014) is a pleasant, often bouncy work whose title indicates a somewhat seasonal interest but whose music simply moves along good-naturedly and for the most part with a tonal center. … Richard Danielpour’s two-movement quintet (2015), which bears the title “The Last Jew in Hamadan” … makes repeated forays into Jewish music as well as strongly felt emotional expression. … Shifrin’s sensitive playing suits the music admirably… Aaron Jay Kernis’ Perpetual Chaconne (2012) is a work of a very different sort: an extended single-movement piece of “pure” rather than descriptive music that opens in quiet, rather lyrical sadness and contrasts that feeling with considerably more-anguished and harsher material as the work progresses. … Shifrin offers the same sort of highly committed, first-rate playing that he brings to all the music on this disc; and in all three works, he receives sensitively played backup and cooperation from the musicians who make up three separate string quartets.”

See the full review on the InfoDad blog.