Isabel Leonard Is Finding A Way In 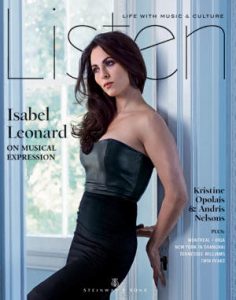 Upcoming Preludios artist Isabel Leonard graced the cover of Listen Magazine’s Winter Issue, and her engaging interview, “Finding A Way In” is available on ArkivMusic.com. Below is an excerpt of the interview featuring a discussion on getting into character, Disney’s Let it Go and introducing new generations to opera:

Ben Finane: I would think that it’s more common in musical theater to sacrifice beauty for character. That is still tough in opera though, because we’re going to hear a singer, and even if she is playing a character — we want to hear her voice. I think there’s a certain expectation of beauty there.

Isabel Leonard: I think so, too. That’s what opera is and that’s okay. Ultimately, when I say an ‘ugly sound,’ it doesn’t mean an untrained voice, or a voice without technique. Everything still has to be used properly and healthily. I don’t want there to be any misconception there. I guess because I have a four-year-old I think about this a lot, but kids are drawn to the visceral and soulful things! They would never tell you that that’s why, but they love it. They get it! If it’s not real, they’re not interested. I think of all the little kids I know, singing the Idina Menzel song from Frozen [“Let It Go”]. She may not have the most beautiful voice ever, but she sure does have a lot of soul, a lot of passion and sincerity. There’s so much in there that’s really musical, and that’s why all of those kids — boys and girls — are singing that song. That surprised me, because it’s been a while since I’ve heard kids singing Disney tunes, and I was trying to figure out why. I didn’t understand until finally I saw the movie with my son, and I was genuinely touched by the song. The story is whatever….

Ben Finane: It’s a true aria: it sums up what’s happening in the movie, but you can also put it in the larger context of your own life experience.

Isabel Leonard: Yeah, and it’s interesting stuff. My son and all his friends from preschool were singing this song, and I think it relates directly to what we have to do in opera.

Ben Finane: Do you think there’s a barrier to entry in opera? I see it — and ballet — as these niches, but niches that flourish because of support from lifelong students of the art. Every former singer, every ballerina continues to see ballet and opera until they die. And you can see it in the audiences, these former dancers at whatever level — amateur, professional. But the kids you mentioned, they sing Disney tunes and maybe go see The Nutcracker.

Isabel Leonard: Well, my son walks around the house singing Papageno’s aria in English because he loves it. It can be done, they just have to be exposed to it and allowed to explore it in their own way. They should be allowed to like whatever they like, and it shouldn’t be made into such a strange thing. It’s a show! Why wouldn’t a kid like the lights and costumes? And a live orchestra where they can look into the pit? Kids want live entertainment. I mean yeah, they love TV, but there’s a reason puppet shows still exist. I took my son to see The Magic Flute in a dress rehearsal at the Met with one of his preschool friends and they sat through the entire show! Recently we were staying with some friends and he asked their daughter to play a song. He started humming ‘La donna é mobile.’ He couldn’t remember what it was called, but he kept humming it. I had no idea where he found that!